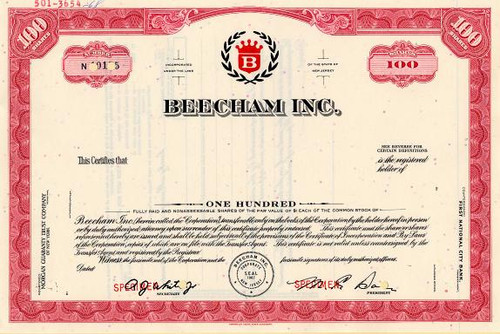 Beautifully engraved RARE specimen certificate from Beecham Inc printed in 1968. This historic document was printed by American Bank Note Company and has an ornate border around it with a vignette of the company's logo. This item has the printed signatures of the Company's President and Secretary and is over 39 years old. 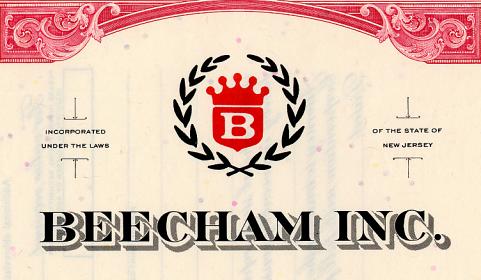 Certificate Vignette
There are four main companies in the history of GlaxoSmithKline: Burrougs Wellcome & Company, Glaxo Laboratories, Beecham, and Smith Kline. In 1880, Burrougs Wellcome & Company was founded. Wellcome Tropical Researches Laboratories was opened in 1902. McDougall & Robertson Inc. was bought by the Wellcome Company to be more active in animal health. Also, the production center was moved from New York to North Carolina in 1970 and the following year another research center was built. Glaxo Laboratories was founded and opened new units in London in 1935. Glaxo Laboratories bought two companies called Joseph Nathan and Allen & Hanburys in 1947 and 1958 respectively. After it bought Meyer Laboratories, it started to play an important role in US market. In 1983, Glaxo Inc. moved to Research Triangle Park and Zebulon in North Carolina for new researches. To be stronger in the medicine market, Wellcome and Glaxo merged in 1995. The new name of the company was GlaxoWellcome. Same year, GlaxoWellcome opened Medicine Research Center in England. Plus, three years later Glaxo Wellcome bought Polfa Poznan Company in Poland. Beecham opened its first factory in England for rapid production of medicines in 1859. Beecham Inc. bought companies for various products. It added Lucozade energy drink and Macleans tooth paste to its product chain in 1938; besides, the following year it added hair products for male by buying another company. However, in 1943 it decided on improving its researches. It built Beecham Research Laboratories and six years later it bought C L Bencard Inc. which specialized in vaccines. In 1830, John K. Smith opened its first pharmacy in Philadelphia. Over the years Smith, Kline and Company favorably amalgamated with the French, Richard and Company because of their successful managment decisions. It changed its name to Smith Kline & French Laboratories to more focus on researching in 1929. Years later, Smith Kline & French Laboratories opened a new laboratory in Philadelphia; furthermore, it bought a laboratory called Norden Laboratories which was making researches about animal health to make researches as much as possible in various areas. To move on this path, Smith Kline & French Laboratories bought Recherche et Industrie Therapeutiques in 1963 to focus on vaccines. Besides, Smith Kline & French Laboratories also wanted to spread all over the world to capture shares in various medicine markets. Because of this, Smith Kline & French Laboratories bought 7 more laboratories in Canada and US six years later. However, in the next years (1982), it bought Allergan which was making products about eye and skin; in addition, it merged with Beckman Inc. After this merge, it changed its name to SmithKline Beckman. In 1988, SmithKline Beckman bought its biggest competitor International Clinical Laboratories and enlarged by 50%. The next year, Beecham and SmithKline Beckman became one and changed the name of the company to SmithKline Beecham plc. Than, headquarter of the company moved to England. To improve the R&D in US, SmithKline Beecham bought a new research center in 1995; moreover, a new research center was opened in New Frontiers Science Park two years later. The latest merge was occurred in 2000 with GlaxoWellcome. Since 2000, the name of the company is GlaxoSmithKline. About Specimens Specimen Certificates are actual certificates that have never been issued. They were usually kept by the printers in their permanent archives as their only example of a particular certificate. Sometimes you will see a hand stamp on the certificate that says "Do not remove from file". Specimens were also used to show prospective clients different types of certificate designs that were available. Specimen certificates are usually much scarcer than issued certificates. In fact, many times they are the only way to get a certificate for a particular company because the issued certificates were redeemed and destroyed. In a few instances, Specimen certificates we made for a company but were never used because a different design was chosen by the company. These certificates are normally stamped "Specimen" or they have small holes spelling the word specimen. Most of the time they don't have a serial number, or they have a serial number of 00000. This is an exciting sector of the hobby that grown in popularity over the past several years. History from Wikipeida and OldCompanyResearch.com.