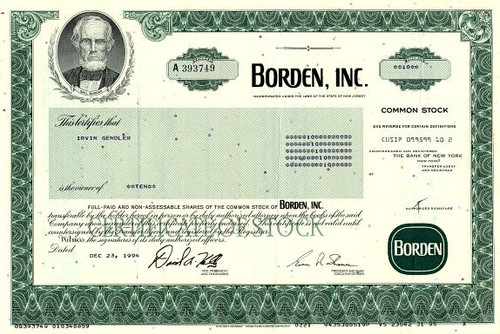 Beautiful certificate from the Borden, Inc issued in 1994. This historic document was printed by United States Banknote Company and has an ornate border around it with a vignette of the company founder Gail Borden. This item has the printed signatures of the Company's President and Treasurer and is over 14 years old. 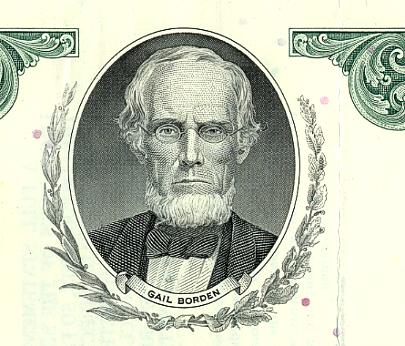 Certificate Vignette
The company was incorporated in 1899 in the state of New Jersey as Borden's Condensed Milk Company, succeeding the New York Condensed Milk Company, also incorporated in New Jersey to succeed the business of Gail Borden, established in 1857. In October, 1919, the corporate name was changed to the Borden Company. Borden, Gail, 180174, American dairyman, surveyor, and inventor, b. Norwich, N.Y. He was for several years a deputy surveyor in Mississippi; afterward he joined the colony of Stephen F. Austin in Texas. There, besides farming, stock-raising, and newspaper activities, he superintended the surveying of lands for Austin. He laid out the city of Galveston, where he became collector of customs. After returning (1851) to New York, he worked on a process of evaporating milk, which he patented in 1856. Jeremiah Milbank backed him financially, and the Borden Milk Company (now the Borden Family of Companies, including Borden Foods Corp. and Borden Chemicals Inc.) opened its first evaporating plant in 1858. During the Civil War his product was found to be of great value to the army, and its use spread rapidly afterward. Borden subsequently also patented processes for concentrating fruit juices and other beverages. Elsie the Cow, a brown Jersey cow, was the mascot for the Borden Company who appeared during THE BORDEN SHOW on NBC in 1947. After the Borden Company began an ad campaign featuring their logo of Elsie the Cow in 1938, they needed a real cow to be their representative and so they recruited a bovine named "You'll Do Lobelia" (born at the Elm Hill Farms in Brookfield, Massachusetts in 1932). In 1940, Elsie got a partner, a husband named Elmer. Both Elsie and Elmer (the mascot for Elmer's Glue) have appeared in print, and media advertisements since the 1930s. Elsie the Cow beat out actor Van Johnson and U.S. Sen. Robert Taft in a 1952 recognition poll surveying America's most familiar faces. In the 1990s, after 15 years in retirement, Elsie was resurrected for an animated TV ad campaign.