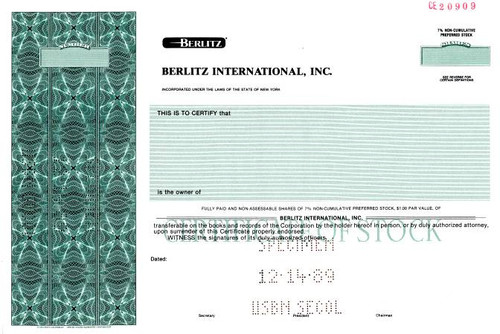 Beautifully engraved specimen certificate from the Berlitz International, Inc. printed in 1989. This historic document was printed by the Security-Columbian United States Banknote Corporation and has an ornate border around it with a vignette of the Company's name. This item is over 27 years old. Berlitz Corporation is a global leadership training and language education company with headquarters in Princeton, New Jersey. The company was founded in 1878 by Maximilian Berlitz in Providence, Rhode Island. Berlitz Corporation is a member of the Benesse Group, with more than 547 company-owned and franchised locations in more than 70 countries. The first Berlitz Language School in Providence, Rhode Island (1878) Berlitz started in 1878, when Maximilian Berlitz was in need of an assistant French instructor; he employed a Frenchman by the name of Nicholas Joly, only soon to discover that Joly barely spoke English, and was hired to teach French to English speakers in their native language. The first Berlitz language school opened in Providence, Rhode Island in July 1878. A decade later, Berlitz moved to Boston, Massachusetts and opened additional schools. Soon after, he opened schools in New York and New Jersey. In 1886, he moved the headquarters and his personal residence to New York City. Before the year 1900 Berlitz opened another eight schools across the country. By the time of the start of World War I in 1914, there were over 200 Berlitz Schools worldwide. Maximilian Berlitz died in 1921. His son-in-law and associate, Victor Harrison-Berlitz, assumed leadership of the business. Harrison died in 1932, and control passed briefly to his son, Victor Harrison-Berlitz, Jr. The control of the company was thereafter passed to Jacques Strumpen-Darrie. Jacques' son Robert succeeded his father as president in 1953. In the 1950s, Berlitz opened its first Latin American language center in Mexico, following with locations in Brazil, Venezuela, Argentina, Colombia, and Chile. In 1966, Berlitz reached Asia, starting with a language center in Tokyo. Today there are more than 90 Berlitz centers in Asia. In 1966, Berlitz became a subsidiary of Macmillan, Inc. Robert Strumpen-Darrie continued as president until his retirement in 1970, and Elio Boccitto led the company through most of the 1980s. In November 1988, Maxwell Communication Corporation took over Macmillan, and just a year later, Berlitz was made public. In 1993, Fukutake Publishing Co. Ltd., now known as the Benesse Corporation, a Japanese publisher of correspondence courses and other educational materials, began purchasing Berlitz stock. In 2001, Berlitz became a wholly owned subsidiary of the Benesse Corporation. In 2009, Berlitz acquired Phoenix Associates Co., Ltd. In November 2010, Berlitz changed its name from Berlitz International, Inc. to Berlitz Corporation. Berlitz acquired Second Language Testing, Inc.(SLTI) in March 2011. SLTI specializes in the development of second language proficiency tests and the translation and adaptation of standardized achievement tests to students' native languages and cultures. In August 2011, Telelangue/World Speaking, a French-based company, accepted an offer by Berlitz Corporation to acquire its stock. On January 1, 2013, Berlitz merged Phoenix Associates Co., Ltd. into Berlitz Japan. Maximilian D. Berlitz Maximilian Berlitz was born in Germany in 1852, the son of a family of teachers and mathematicians. He emigrated to the United States in 1870, settling in Westerly, Rhode Island. In 1877 Berlitz moved to Providence, Rhode Island where he was an instructor of languages at the Bryant and Stratton National Business College, later to become Warner's Polytechnic Business College after an ownership change. "The Berlitz Method" uses the direct method and focuses on using language as a tool for communication. The direct method, as opposed to the traditional grammar translation method, advocates teaching through the target language only the rationale being that students will be able to work out grammatical rules from the input language provided, without necessarily being able to explain the rules overtly. Today, there are a variety of derivative methods and theories which find their beginnings in the natural and communicative elements that were pioneered by Berlitz. About Specimen Certificates Specimen Certificates are actual certificates that have never been issued. They were usually kept by the printers in their permanent archives as their only example of a particular certificate. Sometimes you will see a hand stamp on the certificate that says "Do not remove from file". Specimens were also used to show prospective clients different types of certificate designs that were available. Specimen certificates are usually much scarcer than issued certificates. In fact, many times they are the only way to get a certificate for a particular company because the issued certificates were redeemed and destroyed. In a few instances, Specimen certificates were made for a company but were never used because a different design was chosen by the company. These certificates are normally stamped "Specimen" or they have small holes spelling the word specimen. Most of the time they don't have a serial number, or they have a serial number of 00000. This is an exciting sector of the hobby that has grown in popularity over the past several years.