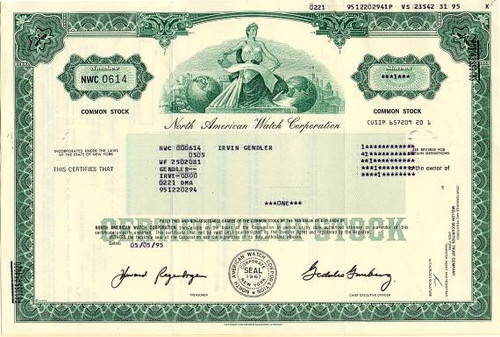 Beautiful uncancelled certificate from the North American Watch Corporation issued in 1995. This historic document was printed by Security-Columbian Banknote Company and has an ornate border around it with a vignette of an allegorical woman behind two globes. This item has the pinted signatures of the Company's President and Treasurer and is over 12 years old. 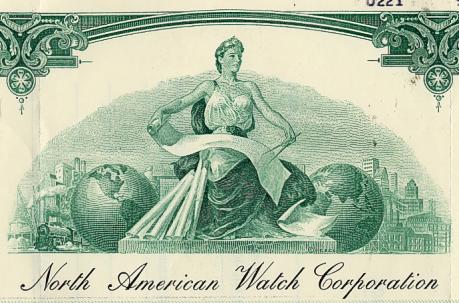 Certificate Vignette
North American Watch Corporation completed its public offering in October 1993. The company changed its name to the Movado Group, Inc. in 1996. Movado Group, Inc. engages in the manufacture, distribution, and retail of watches and jewelry. It offers its watches under the brands, including Movado, Ebel, Concord, ESQ, Coach Watches, HUGO BOSS Watches, Juicy Couture Watches, Tommy Hilfiger Watches, and Lacoste Watches. The company also designs, develops, and markets proprietary Movado-branded jewelry, and tabletop and accessory products. Movado Group sells its products directly, as well as through jewelry store chains, department stores, and a network of independent distributors in North America, Europe, Asia, the Middle East, South America, and the Caribbean. In addition, it operates outlet stores to sell discontinued models and factory seconds in the United States. As of January 31, 2007, Movado Group operated 31 Movado Boutiques and 30 outlet stores. The company was founded in 1961. The company is headquartered in Paramus, New Jersey.