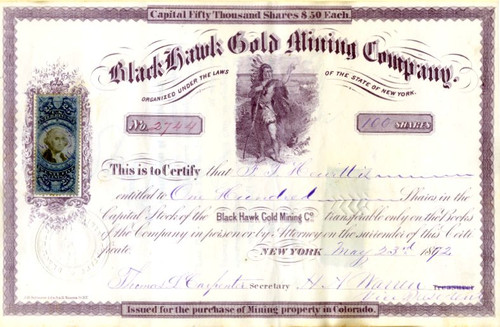 Beautiful stock certificate from the Black Hawk Gold Mining Company issued in 1872. The company was incorporated in new York. This historic document was printed by the J. O. Seymour Company, New York and has an ornate border around it with a vignette of a Black Hawk Indian. This item has the signatures of the Company's Vice President, H. A. Warren and Secretary, Thomas L. Carpenter. The certificate is issued to F. T. Hewitt and is endorsed by him on the back. 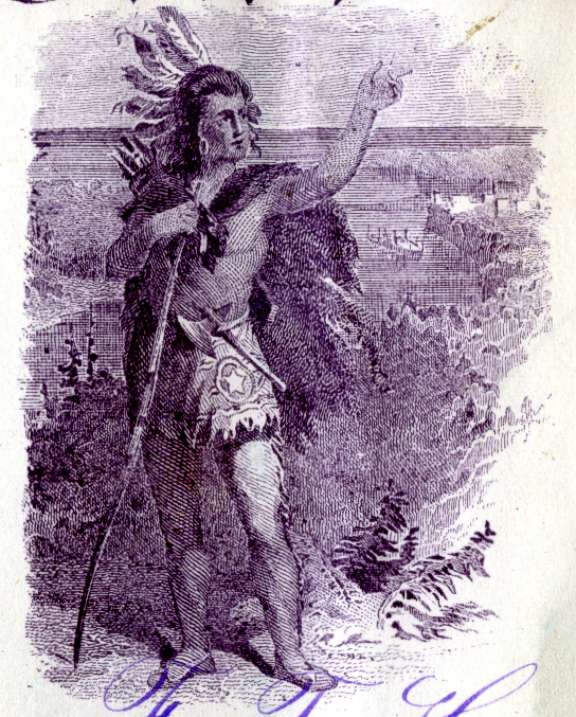 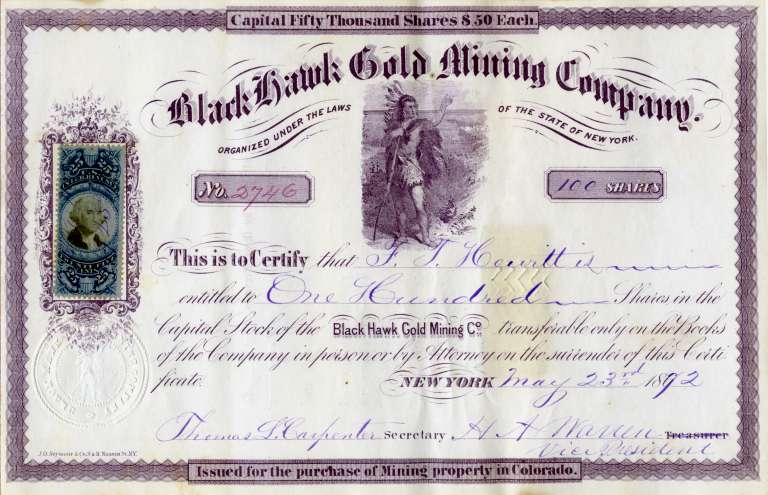 Certificate
The Mines of Colorado - 1867 Spring while the snows are melting and there is an immeasurable surplus of water, thus not robbing the lower Fall River country of its natural stream. Then, if mining should become a separate branch of business from the treatment of the ores, as it np doubt ought and will, these powers to be used for hoisting, crushing, and dressing, the ore to be taken to the coal-beds at the base of the Mountains for treatment, or the coal to be brought up, either of which would nearly dispense with the use of wood- fuel. But it would necessitate the construction of a railway from Black Hawk via Clear Creek Kan- yon to Golden City. A careful survey has demon- strated the entire practicability of this project, the grade, with three tunnels -- aggregate length, 3000 feet -- averaging about 100 feet per mile for the dis- tance, twenty-one miles. In view of the benefits that would result from their completion, these great enterprises are the most feasible of any we know of. The prospect is that the consumption of fuel will go on increasing until there will be no escape from one or the other or both of them. It is within a radius of one and a half miles from Central City that all the lodes and improvements mentioned hereafter in this chapter, occur. Tum- bled headlong into so small a compass are Bobtail, Bates, Gregory, Mammoth, Quartz, Casto, and Gold Hills, with their complicated net-work of rich veins, to say nothing of as many more with no special names. The outlying districts of the county, and there are some, must be consigned to a separate chapter. For precise information with regard to the boundaries, streams, towns, and topography of the county, the reader is referred to an accurate map on a large scale, delineated from careful sur- veys by Messrs. Morse & Hill of Central City. The examination of the mines of Gilpin County, a re- port of which follows, was made in August 1866, by the writer in person. The Black Hawk Gold Mining Company have 500 feet on the Gregory, being No's 1, 2, 3, 16 and 17 west ; 200 on the Foot & Simmons, 250 on the Gregory Extension, 76 on the Bobtail, and a great deal of less developed mining property. It is with that which is productive we have to do. They are working 1, 2 and 3 on the Gregory, running a level 380 feet from the surface. The first level is the bottom of the old mine, and is about 300 feet from the surface. Above that there is still much virgin ground. The lower level will soon be finished, exposing ground nearly 100 feet deep by 300 long, and in all probability two crevices, the entire length, from five to fifteen feet apart. These will doubtless come together at a greater depth. The Gregory main crevice varies in width from two to four feet ; the other crevice is perhaps half as large. The work- ing shaft is on No. 2, and is strongly timbered. A six-inch pump removes the water from the entire mine. On No. 1 there is also a shaft, now 330 feet deep, opening on the surface in a 20-stamp mill. The hoisting and pumping are done by a 1 so-horse 7 engine, which also furnishes motive power for the mill. The Foot & Simmons mine shows an aver- age crevice a foot in width, is run by the Consoli- dated Gregory engine adjoining, and is in very good shape, worked by regular levels, the first two of which are exhausted ; the third, at a depth of 260 feet, now furnishing stoping ground. The main shaft is being carried down in time for the fourth level. Dump cars convey the ore to the shaft on tramways, there is little or no water in the mine, and it is worked very economically* In the Bob- tail mine, operations are suspended for want of a pump. The last work done was excavating a level 400 feet from the surface, and taking out the back. In the floor a crevice is exposed for 64 feet, three feet wide -- nearly half of it pure ore. There is a large engine-house, with a 40-horse engine, on the Bobtail mine. On Gregory 16 and 17, there are shafts 60 and 90 feet deep respectively, both of them on good veins of ore. Nothing has been done on them for two or three years. On the Gregory Extension a shaft has been sunk 285 feet, and a level run near the bottom in either direction 40 or 50 feet. The crevice is yet rather pinched, the ore badly mixed with poor rock.f The mine furnishes just enough water to rtfn the hoisting en- gine. A wooden railway and car convey the ore 300 yards to the mill in Black. Hawk. The Company have a large, frame, stamp-mill in the heart of Black Hawk -- sixty 88o-lb. stamps. The crushed material runs over short stationary copper plates on to shaking tables of the Keith pattern, whence it passes into Cornish buddies for concentration. The engine is 150-horse, and is supplied with water froih North Clear Creek, which passes between the engine-house and mill. A steam pump and suffi- cient hose provide reasonable guarantee against accidents by fire. This mill and that on the Gregory have produced during the Summer not far from $3,000 a week. The Company have twenty stamps not yet set up, and a large amount of min- ing supplies. It is at present under the manage- ment, in Colorado, of W. L. Lee, one of the original owners, still a very large stockholder, and an in- comparable business man. History from Encyberpedia and OldCompany.com (old stock certificate research service)