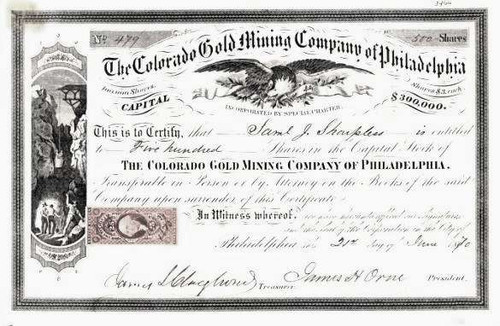 Beautifully engraved certificate from the Colorado Gold Mining Company of Philadelphia issued in 1870. This historic document has an ornate border around it with a vignette of an eagle and men working in a mine. This item is hand signed by the Company's President and Treasurer and is over 142 years old. Light toning in left hand corner otherwise EF+ The company was incorporated by special charter in 1864. Certificate # 481 issued to Samuel J. Sharpless for 500 shares in 1870. Signed by President James H. Orne and Treasurer James L. Claybury. Uncancelled. Vignette top center of spread-winged bald eagle clutching olive branch; at left of miners descending in ore bucket to workers below. Black border on white paper. Red 25 cent revenue stamp lower left over corporate seal. 7 x 11. Printer - J. F. Finkeldey Agent Lith.. Phila. The operated in the Buckskin district of Colorado in the late 1860's. In 1866 they built a large mill which was operating by the end of the year and had taken thousands of tons of quartz and ore from the Excelsior Lode. The Excelsior cropped out along the edge of a gorge north and 1000 feet above the town. The company owned 1000 ft of the lode and were working 200 ft of it that year. The vein was 17 ft wide and averaged $79 per ton with small pockets of silver grading $5000 per ton. At 130 ft below the surface, very rich copper ore was encountered and transported to the mill below by chutes and self-acting cars. A tunnel was begun about 400 feet below the outcrop and was expected to work the lode when completed. A second tunnel was also under construction that was expected to reach the lode when ore in the upper levels was exhausted. The mill, with a capacity of 100 tons per day, contained a Hodge & Christie cracker, two sets of Cornish rollers, and six stone arastras, twenty feet in diameter. Lumber and timbers used in the mill construction were cut in the company's saw mill. The ore processing mill was designed so the ore moved as desired by its own gravity (Holabird Western Americana). Very fine but has small stain in upper left corner.