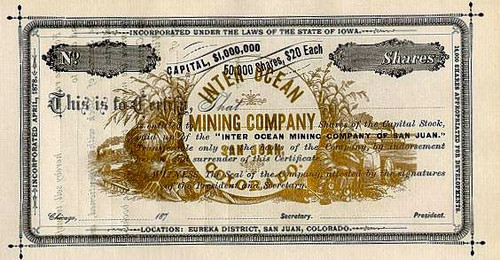 Beautiful unissued stock certificate from the Inter Ocean Mining Company printed around 1878. The company was located in the Eureka District in San Juan, Colorado. This historic document has an ornate border around it with a gilt medallion at center with company name, printed over a gilt harvest scene vignettea gold back print of the company's name, farming tools, a steamboat, train and food. This item is over 133 years old. Report of the director of the Mint - 1883 On Treasury Mountain the Inter-Ocean Mining Company own the Scotia mine. The vein is a strong quartz ledge, varying in width from 10 to 40 feet. It is developed by a cross-cut tunnel 80 feet in length which cuts the vein 95 feet below the surface. At the end of this tunnel is a short drift connecting with the main shaft which in 100 feet. At this depth a level is run 100 feet disclosing a good body of sulphurets, the average value of which is from $35 to $90 per ton. The mineral streak is from 2 to 6 feet wide. About 2,000 tons of ore are on the dump waiting to be concentrated The present value is $25 per ton. The Western investors review 1907 THE INTER-OCEAN MINING COMPANY. Mr. H. S. Merrill, general manager of the Inter-Ocean Mining Company, is getting matters in shape for a vigorous prosecution of development work in the Inter-Ocean mine. Hon. A. E. Healy is in full charge of the mining operations. The management will confine the operations during the winter to the opening up of new ground by driving the 500 level and sinking to the shaft a further 200 feet with drifts at proper intervals to open up known ore shoots as in the 500 level and those above. The present breast of the 500 level is supposed to be close to the rich ore shoot which was worked in the upper levels at such great profit, and contributed so largely to making the record of the mine as a producer beyond the million mark. Leaving out consideration of this rich ore shoot the Inter-Ocean is a great property, the immense tonnage of good milling ore giving assurance of large dividends when the plans of the company regarding development are completed and the fifty-ton mill, thoroughly equipped for its work shall, begin grinding on these ores. The mines of the San Juan District contributed a large portion of the mineral wealth that fueled the late 19th- and early 20th-century growth of our nation. History from Encyberpedia and OldCompany.com (old stock certificate research service)