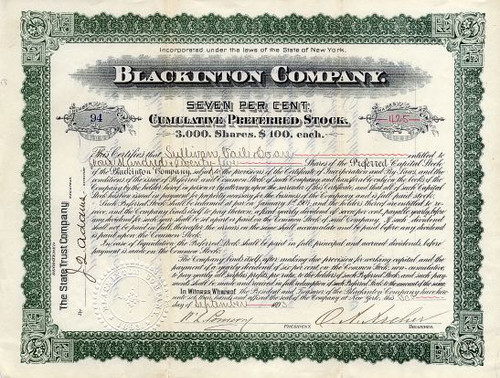 Beautiful certificate from the Blackinton Company issued in 1893. This historic document has an ornate border around it with a vignette of the company name. This item has the signatures of the Company's President, W. L. Pomerory and Treasurer, Oscar A. Archer and is over 116 years old.

Certificate Vignette
Sanford Blackinton started his woolen mill on the banks of the Hoosic River in 1821. It was small mill with one set of machinery and alot of the work was done by Blackinton and his two partners, J.L White and Rufus Wells. They Blackinton Mill expanded to a second mill nearby. These two mills together employed forty people in the manufacture of woolen cloth and satinet. One mill prepared cotton wrap for the satinet while other was for carding, spinning, and the weaving of the wool. The weaving was done on handlooms in the mill until the introduction of power looms in 1825. For thirty years, the Blackinton Company was growing. In fact, it grew so much that that it needed a bookkeeper, Oscar Archer. Oscar Archer was a teacher from New York. Archer was considered an "emblem of change for the mill." He kept a double entry bookkeeping. He replaced the old system of pay which was running accounts at the Blackinton company store. There was now a regular payday every three months. In 1857, North Adams hit a high in the textile industry and woolen companies. Seventy percent of all employees in manufacturing worked in cotton and woolen mills and one half of the woolen workers worked at Blackinton Mill. By this time the one set of machinery expanded to seven sets of machinery and seventy looms. This made it possible for Blackinton Mill to to produce approximately 1200-1500 yards of wool a day. More men were employed than women. Supervising positions were always men and over half the weavers were women. Children worked in the carding, spinning and weaving rooms. In 1869, 162 men, 105 and 35 children worked in the mill. Welsh immigrants began to come and work in the Blackinton Mill in 1872. The length of the working day was eleven hours. The only time the mill would close down would be for mill fires, machinery repairs, or low water supply. But overall, the Blackinton Mill would be considered a very successful mill for its time and employed numerous people in the Blackinton village. History from Wikipedia.