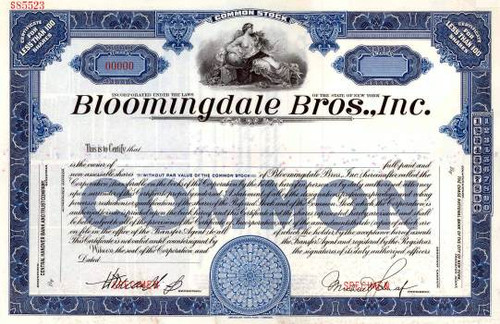 Beautifully engraved SPECIMEN certificate from the Bloomingdale Bros. Inc. This historic document was printed by the Security-Columbian Banknote Company and has an ornate border around it with a vignette of an allegorical woman leaning on a globe. This item has the printed signatures of the Company's President and Secretary. This is the first time we have seen this certificate. 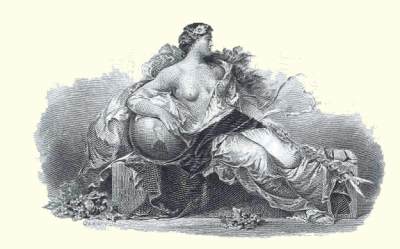 Certificate Vignette
Bloomingdale's Inc. is an American department store chain; it was founded by Joseph B. and Lyman G. Bloomingdale in 1861. It became a division of the Cincinnati-based Federated Department Stores in 1994, through which it is affiliated with the Macy's department store chain; the holding company was renamed Macy's, Inc. in 2007. As of February, 2019, there are 35 full-line stores, 3 home, clearance and specialty stores and 17 outlet stores with the Bloomingdale's nameplate in operation throughout the United States. Its headquarters and flagship store are located at 59th Street and Lexington Avenue in the New York City borough of Manhattan. The retail market boomed in the 1980s. New stores opened along the East Coast, Florida, Chicago, and in Dallas, Texas. On February 14, 2008, parent company, Macy's, Inc., announced plans to enter the Phoenix market with a 180,000 square foot store by 2009. Arizona would have been the thirteenth state to have a Bloomingdale's store location, with this store being the tenth in the western U.S. and 41st throughout the chain. On September 10, 2008, Bloomingdale's announced plans to open three stores, two of which will be modeled after the SoHo store: a 3-level, 82,000-square-foot (7,600 m2) anchor store at The Shops at Georgetown Park in Washington, D.C., by August 2011, a 3-level 150,000 sq ft (14,000 m2) store at Westfield Valley Fair in San Jose, California, by Fall 2011, and a 205,000 sq ft (19,000 m2) store in Santa Monica Place, in Santa Monica, CA (which opened on August 6, 2010). The store is reported to be modeled after the chain's concept store in New York's SoHo neighborhood to carry select contemporary men's and women's apparel. Twelve days later the first proposed overseas locations for the chain were announced. A September 22, 2008, press release from Macy's, Inc.,told of plans for two Bloomingdale's locations (a three-level 146,000 sq ft (13,600 m2) apparel and accessories store, as well as a separate one level 54,000 sq ft (5,000 m2) home store) to open in February 2010 in Dubai, United Arab Emirates. As is the case for rival Saks Fifth Avenue, the international presence for Bloomingdale's will be operated under license by a local interest -- in this case, Al Tayer Group LLC, a leading UAE-based conglomerate.Bloomingdale's CEO announced that the Dubai store will most likely be the only store outside of the US since Bloomingdale's has no further plans to expand to other countries. On November 3, 2011, Bloomingdale's announced it opened a new 120,000 sq ft (11,000 m2) store in Glendale Galleria in late 2013 as part of the mall's remodeling plan. Bloomingdale's announced that they had replaced the Bloomingdale's store of 229,000 sq ft (21,300 m2) in Stanford Shopping Center in Palo Alto, California, with a new 120,000 sq ft (11,000 m2) store. The store opened in 2014. On November 12, 2015, Bloomingdale's opened up their very first store in Hawaii at Ala Moana Center in Honolulu, Hawaii. The three-story, 165,000 sq ft (15,300 m2) store replaced a former Sears, and includes special services, such as smart fitting rooms, charging lounges and dining services at its 40 Carrots restaurant. History from Wikipedia and OldCompany.com (old stock certificate research service)