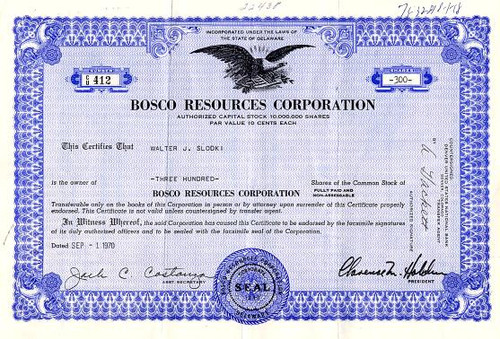 Certificate Vignette
Bosco Resources Corporation was incorporated in Delaware on April 13, 1970. The company operated until June 10, 1973, when it ceased operations after its assets were nationalized without compensation by the Libyan Government. The Company remained inactive until December 15, 1986 when it acquired all of the outstanding shares of APPRAISAL GROUP, INC. in exchange for 4,150,000 shares of common stock (after a 1 for 8 reverse split) and changed its name to APPRAISAL GROUP INTERNATIONAL INC. Subsequently, on August 10, 1989, the Company's name was changed to INTERNATIONAL REALTY GROUP, INC.