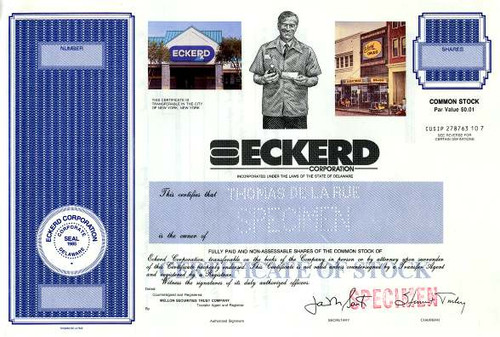 Beautifully engraved SPECIMEN certificate from the Eckerd Corporation. This historic document was printed by Thomas de la Rue in 1994 and has a block border with vignettes of a pharmicist and colored pictures of an old and modern store. This item has the printed signatures of the Company's Chairman and Secretary. 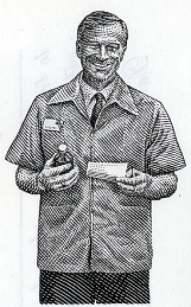 Certificate Vignette
WOONSOCKET, RI, April 5, 2004 CVS Corporation (NYSE: CVS) today announced that it has entered into a definitive agreement under which it will acquire from J.C. Penney Company, Inc., approximately 1,260 Eckerd drug stores, located mainly in the southern United States; Eckerd Health Services, which includes Eckerd's $1 billion mail order and pharmacy benefits management businesses; and three Eckerd distribution centers. The cash transaction is valued at $2.15 billion. Following completion of the transaction, CVS will be America's leading pharmacy retailer with more than 5,000 locations in 36 states and the District of Columbia. CVS' PharmaCare subsidiary will nearly double in size to more than $2 billion in annual revenues and will serve approximately 30 million lives. In total, CVS will fill approximately 13% of the nation's retail prescriptions. The combined 2003 revenues of CVS Corporation and the operations it has agreed to acquire were approximately $33 billion. About Specimens Specimen Certificates are actual certificates that have never been issued. They were usually kept by the printers in their permanent archives as their only example of a particular certificate. Sometimes you will see a hand stamp on the certificate that says "Do not remove from file". Specimens were also used to show prospective clients different types of certificate designs that were available. Specimen certificates are usually much scarcer than issued certificates. In fact, many times they are the only way to get a certificate for a particular company because the issued certificates were redeemed and destroyed. In a few instances, Specimen certificates were made for a company but were never used because a different design was chosen by the company. These certificates are normally stamped "Specimen" or they have small holes spelling the word specimen. Most of the time they don't have a serial number, or they have a serial number of 00000. This is an exciting sector of the hobby that has grown in popularity over the past several years.