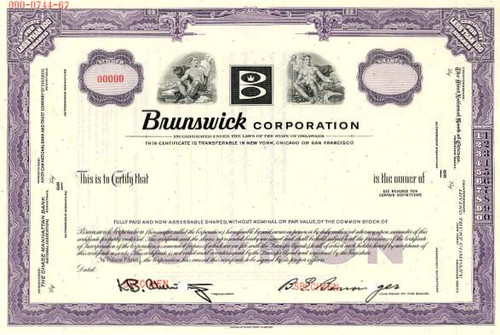 Beautifully engraved SPECIMEN certificate from the Brunswick Corporation. This historic document was printed by the American Bank Note Company and has an ornate border around it with a vignette of the company logo in the center with an allegorical man on its sides. This item has the printed signatures of the Company's Chairman of the Board and its Treasurer.

Certificate Vignette
By John Brunswick, a Swiss immigrant woodworker in 1845, in Cincinnati, Ohio, to make billiards tables. Lake Forest, Illinois, a Chicago suburb. 2003 net sales were $4.1 billion, operating earnings were $221.4 million, and net earnings were $135.2 million, or $1.47 per diluted share. Brunswick's products are sold throughout North America, the United Kingdom, South America, Europe, Asia and Australia. The ticker symbol for Brunswick Corporation common stock is BC. Brunswick stock is traded on the New York, Chicago, London and Pacific stock exchanges. $2.9 billion at December 31, 2003 92.1 million at December 31, 2003 Brunswick Corporation employs more than 23,000 people worldwide. Mercury Marine Group Based in Fond du Lac, Wisconsin, Mercury Marine is the leading producer of marine engines in the world. 2003 net sales were $1.9 billion. Primary products include Mercury and Mariner outboard engines, Mercury MerCruiser sterndrive and inboard engines, Mercury Precision Parts and accessories, MotorGuide trolling motors and Teignbridge propellers. Brunswick Boat Group Headquartered in Knoxville, Tennessee, the Brunswick Boat Group is the largest maker of pleasure boats in the world. 2003 net sales were $1.6 billion. The Boat Group makes Sea Ray, Bayliner, Maxum, Hatteras, Meridian and Sealine pleasure boats from 16 to 100 feet; Baja high-performance boats from 20 to 44 feet; Boston Whaler and Trophy offshore fishing boats from 11 to 32 feet; and Crestliner, Lowe, Lund and Princecraft aluminum fishing, deck and pontoon boats from 12 to 26 feet; Land 'N' Sea parts and accessories distribution, and Attwood marine parts and accessories. Life Fitness Division The Life Fitness Division is the global leader in high-quality commercial and consumer cardiovascular and strength training equipment. 2003 net sales were $486 million. Based in Franklin Park, Illinois, it markets and manufactures Life Fitness, Hammer Strength and ParaBody equipment serving health clubs, professional athletic teams, university athletic departments and the military. Bowling & Billiards Brunswick Bowling & Billiards is based in Lake Forest, Illinois. Net sales in 2003 were $392 million. Brunswick makes bowling equipment and supplies as well as operates more than 100 family bowling centers throughout the United States, Canada and Europe. Brunswick billiards tables and accessories are the market leaders and recognized around the world for their superior construction, style and performance. Brunswick also makes Valley-Dynamo pool, Air Hockey and foosball tables. Brunswick New Technologies Brunswick New Technologies, headquartered in Lake Forest, Ill., is comprised of Northstar Technologies, marine navigational systems; IDS, marine dealer management systems; MotoTron, which designs and supplies sophisticated engine control and vehicle networking systems; the Brunswick Marine Innovation Center in Singapore; and BWI, developers of business integration and integrated content management software. Brunswick also has a 70 percent interest in Navman NZ Limited, a New Zealand-based leader in global positioning system (GPS)-based products and marine electronics. BNT sales are included in Mercury Marine Group. History from company media informatiom. About Specimens Specimen Certificates are actual certificates that have never been issued. They were usually kept by the printers in their permanent archives as their only example of a particular certificate. Sometimes you will see a hand stamp on the certificate that says "Do not remove from file". Specimens were also used to show prospective clients different types of certificate designs that were available. Specimen certificates are usually much scarcer than issued certificates. In fact, many times they are the only way to get a certificate for a particular company because the issued certificates were redeemed and destroyed. In a few instances, Specimen certificates were made for a company but were never used because a different design was chosen by the company. These certificates are normally stamped "Specimen" or they have small holes spelling the word specimen. Most of the time they don't have a serial number, or they have a serial number of 00000. This is an exciting sector of the hobby that has grown in popularity and realized nice appreciation in value over the past several years.