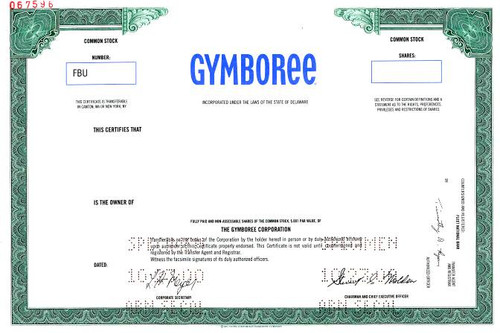 Beautifully engraved specimen certificate from the Gymboree printed in 2000. This historic document was printed by the Security-Columbian Banknote Company and has an ornate border around it with a vignette of the company's name. This item has the printed signatures of the Company's Chairman and Chief Executive Officer, and Corporate Secretary, and is over 11 years old.

Certificate Vignette
The Gymboree Corporation is a publicly-traded San Francisco-based corporation that operates a chain of around 900 specialty retail stores of children's apparel in the United States, Puerto Rico, Mexico and Canada. It nearly has 500 Play and Music centers worldwide. It is traded on the Nasdaq exchange with symbol GYMB. (Dec. 16, 2005) Joan Barnes created the Gymboree Play and Music Program in 1976 when she couldn't find a safe place for new parents and children to play and exercise together. The Play centers' main purpose is to help children stimulate their development through music, exercise, art, and other activities as well as helping parents know how to participate in furthering their children's mental and physical growth. Gymboree classes include a multi-colored clown named Gymbo. The children interact with Gymbo following his "demonstrations" of activities and usually ending with "good-bye kisses". Other class activities include time playing with parachutes, playing with bubbles, and climbing on cushioned equipment. Classes are run for Infants up to age 6. Music played at Gymborees is often by the children's band Parachute Express. There are located across the United States, Puerto Rico, Mexico, and Canada. It has expanded its franchises in 30 countries including Bogota, Colombia; San Paulo, Brazil; Hangzhou, China; Hyderabad, India. Gymboree franchises nearly 300 Gymboree Play & Music centers around the globe. In recent years, Gymboree is competing with The Little Gym, Romp 'n' Roll, and My Gym. In 1986, the company opened a chain of clothing stores named Gymboree. Gymboree stores offer coordinating children's clothing. The sizes range from birth to age twelve. Gymboree, in its current incarnation (it has reorganized several times) is incorporated under the Gym-Mark, Inc nameplate. It currently operates 580 Gymboree Retail, 80 Gymboree Outlet, 100 Janie & Jack, and 20 Crazy 8 stores in the United States. Gymboree operated a chain of 17 women's clothing stores called Janeville until all locations closed by January 2007. Crazy 8 was started in August, 2007. It features lower-cost articles of apparel and is Gymboree's direct competitor for The Children's Place and Old Navy. The music and play centers sell products related to their activities, such as toys, musical instruments, and compact discs. About Specimen Certificates Specimen Certificates are actual certificates that have never been issued. They were usually kept by the printers in their permanent archives as their only example of a particular certificate. Sometimes you will see a hand stamp on the certificate that says "Do not remove from file". Specimens were also used to show prospective clients different types of certificate designs that were available. Specimen certificates are usually much scarcer than issued certificates. In fact, many times they are the only way to get a certificate for a particular company because the issued certificates were redeemed and destroyed. In a few instances, Specimen certificates were made for a company but were never used because a different design was chosen by the company. These certificates are normally stamped "Specimen" or they have small holes spelling the word specimen. Most of the time they don't have a serial number, or they have a serial number of 00000. This is an exciting sector of the hobby that has grown in popularity over the past several years.