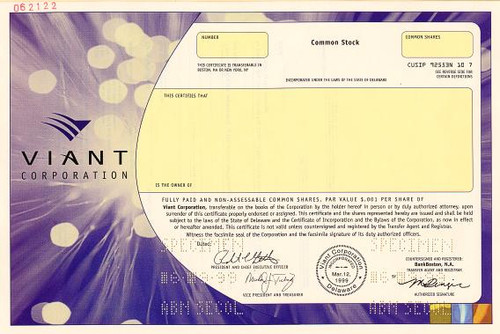 Beautiful engraved RARE specimen certificate from the Viant Corporation dated 1999. This historic document has an ornate border around it with a vignette of the company name and logo. This item has the printed signatures of the Company's President, Gett and Treasurer, Michael Tubridy. We only have one of these. 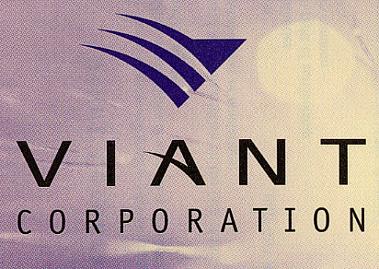 Certificate Vignette
Viant Inc. was a San Francisco-based internet consulting firm, founded in April 1996, that became one of the most successful web consulting firms during the early stages of the internet era. The company was founded by Eric Greenberg, and Co-Founders Robbie Vann-AdibÃ© and Dwayne Nesmith as Silicon Valley Internet Partners (SVIP). It was one of the first consulting firms to attempt to integrate the disparate disciplines of strategy, creative and technology into a single value proposition and project approach. Such blended multi-disciplinary approaches have since become common. With investment from Mohr Davidow Ventures, Trident Capital and Kleiner, Perkins, Caufield & Byers it grew rapidly. Initially it was incubated out of the offices of CKS Group (prior to its merger with USWeb) in Campbell CA. An external CEO was recruited in Mid 1996 Robert Gett from Cambridge Technology Partners, at which point corporate functions moved to Boston. Eric Greenberg left the company in early 1997, and subsequently founded Scient. The company changed its name to Viant in the spring of 1998. Its Bay Area offices relocated in 1998 to the South of Market area in San Francisco - 650 Townsend Street. Original Viant Logo.Viant grew organically in the following years, with offices "spawned" by sending multi-discplinary teams from other offices into new geographies, including locations in New York City, Dallas, Chicago, Los Angeles, London, Munich, and others. The company went public in June 1999. By Dec 1999 it enjoyed a stock price of US$105 per share and a market capitalization of over US$2bn. Co-Founder Robbie Vann-AdibÃ© left the firm in June 2000. At the time of the IPO in June 1999, the management team was reported as: Robert ("Bob") Gett, President & CEO Tim Andrews, Chief Technology Officer Richard ("Rick") J. Chavez, Chief Strategy Officer Frank Dudley, Chief Creative Officer Diane ("Di") Hall, Chief People Officer Dwayne Nesmith, Chief Financial Officer Michael Tubridy, VP, Finance & Treasurer Sherwin Uretsky, VP, Worldwide Sales Michael Keany, VP, London General Manager Ed Mello, VP, Dallas General Manager Paul Michaud, VP, New York General Manager Chirag Patel, VP, Boston General Manager Lance Trebesch, VP, Los Angeles General Manager Robbie Vann-AdibÃ©, VP, London General Manager Xavier Y. Zang, VP, San Francisco General Manager Viant invested in a set of systems for Staffing and Project management and also Knowledge Management. These systems were sold in a deal with a start-up company Portera, which in turn were sold to Exigen and became the basis for its Professional Services Automation (PSA) business. As part of its activities, Viant worked with a variety of venture backed start-ups, incubating them by providing infrastructure, staffing to build the offering and other related services. Viant's activities in this area were quite successful with many of these companies surviving long after Viant. The internet downturn hit the company hard forcing layoffs in 2001 and 2002. The company was sold in September 2002 to divine (corporation) the company founded by Andrew Filipowski History from Wikipedia and OldCompanyResearch.com. About Specimens Specimen Certificates are actual certificates that have never been issued. They were usually kept by the printers in their permanent archives as their only example of a particular certificate. Sometimes you will see a hand stamp on the certificate that says "Do not remove from file". Specimens were also used to show prospective clients different types of certificate designs that were available. Specimen certificates are usually much scarcer than issued certificates. In fact, many times they are the only way to get a certificate for a particular company because the issued certificates were redeemed and destroyed. In a few instances, Specimen certificates we made for a company but were never used because a different design was chosen by the company. These certificates are normally stamped "Specimen" or they have small holes spelling the word specimen. Most of the time they don't have a serial number, or they have a serial number of 00000. This is an exciting sector of the hobby that grown in popularity over the past several years.