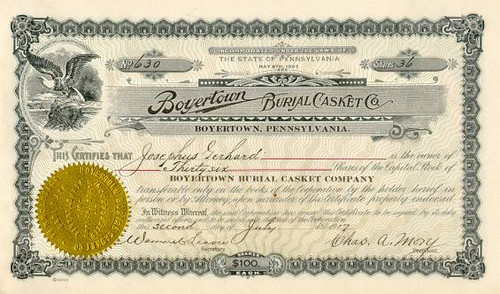 Beautifully engraved Certificate from the Boyertown Burial Casket Company issued in 1917 in the middle of WWI. This historic document has an ornate border around it with a vignette of an eagle. It also has an embossed corporate seal on the bottom. This item is hand signed by the President, Chas Mory and is over 88 years old. Below is a little history of the company's beginnings: The beginning Boyertown Casket Team: 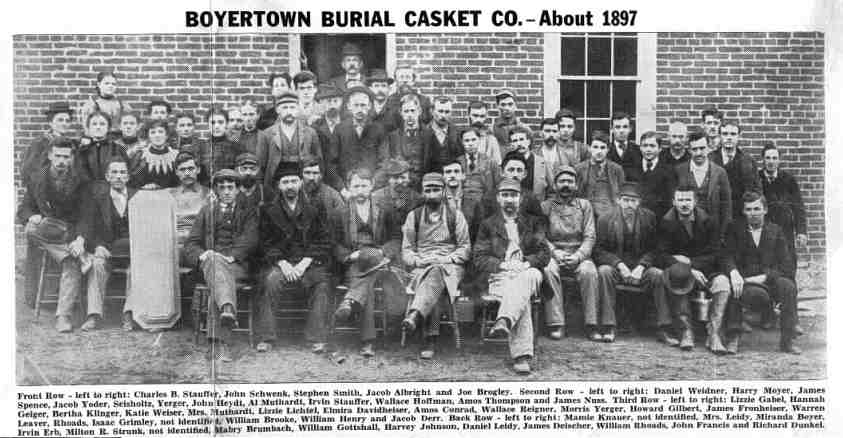 A NEW INDUSTRY BURIAL CASKETS TO BE MANUFACTURED IN BOYERTOWN - Boyertown Democrat -- April 1, 1893 The Capital Stock Fixed at $20,000~ Which is All Subscribed For in a Few Days L Boyertown, March 25, 1893--A stock company has been organized in Boyertown for the manufacturing of burial caskets on a large scale. The project has been talked of and carefully considered by several of our leading citizens, and has in the past few days, taken definite shape. A charter is to be applied for at once. A meeting has been called to assemble in B. M. Yost's Building on next Monday evening to perfect an organization. Boyertown Democrat--March 25, 1893 v BOYERTOWN'S NEW INDUSTRY A SUCCESS j BOARD OF DIRECTORS MADE The First Meeting Well Attended and Important Business Transacted Boyertolvn, April 1, 1893--The first meeting was \ held as scheduled in Yost's Building last Monday, evening. The following Board of Directors was . elected. Daniel C. Brumbach, Henry B. Wagner, s W. D. Kehl, C. A. Mory and Ja.mes K. Boyer. s J. F. D. Geiger was appointed Secretary, protem, and Wallace Reigner, Treasurer. t As stated in last week's paper, all the stock of the company was subscribed for within a few days after the idea was first proposed. Boyertown Democrat -- April 1, 1893