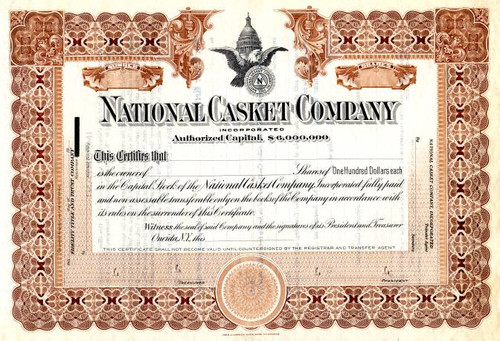 Beautifully engraved specimen certificate from the National Casket Company. This historic document was printed by the John A. Lowell Banknote Company and has an ornate border around it with a vignette of the Capitol dome, an eagle, and the Company's logo. 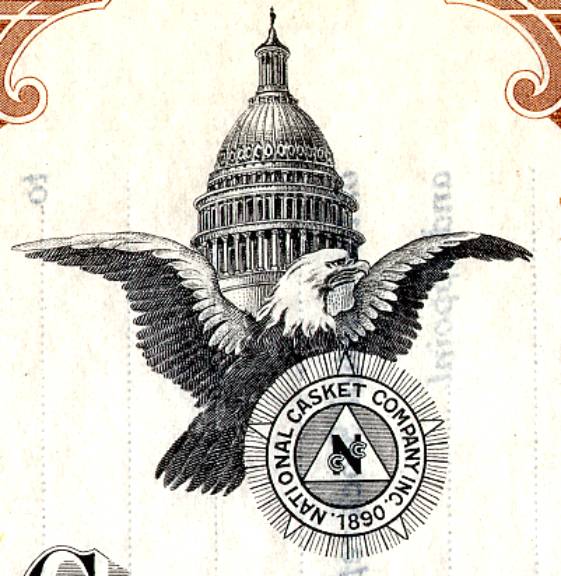 Certificate Vignette
From The Story of Pittsburgh - 1919 NATIONAL CASKET COMPANY, INC. The National Casket Company, Incorporated, is a nation-wide concern for the manufacture and distribution of burial receptacles and equipment required for the conduct of modern funerals. In 1864 William Hamilton, James T. Arnold, J. W. Carnahan and H. G. Algeo started the first coffin and casket factory west of the Allegheny Mountains, known as the Excelsior Coffin and Casket Works, the original plant being located on Virgin alley, now Oliver avenue, Pittsburgh, Pa. In the '80s they moved to old Allegheny. The firm name was changed to the Hamilton, Lemmon, Arnold Company. In 1890 this company consolidated with the Chappell, Chase, Maxwell Company of Oneida, N. Y., and the Stein Manufacturing Company of Rochester, N. Y., and formed the National Casket Company, Inc., with an authorized capital of $3,000,000. Some years later they added to the consolidation a number of other firms in the south and southwest, increasing the capital to $6,000,000. The present authorized capital stock of the company consists of an equal number of shares of non-par preferred stock and non-par common stock. The late William Hamilton of the North Side, Pittsburgh, Pa., was the first president of the National Casket Company, Inc. The present officers of the company are P. B. Heintz of Boston, president and general manager; Leo Stein of New York City, first vice president; F. C. Guthrie of Nashville, Tenn., second vice president; H. M. Tuttle of Boston, Mass., third vice president; W. E. Carnahan of Pittsburgh, treasurer; F. C. McKee of Pittsburgh, assistant treasurer; H. L. Stein of Boston, secretary, and H. A. Haney of Boston, assistant secretary. Robert J. Cleland of Pittsburgh, is a director in the company. The executive offices are located at No. 3 Park Street, Boston. The treasurer's office is at 2216 Oliver Building, Pittsburgh. The company maintains sixteen factories, two casket hardware factories and twenty-two sales rooms. Of the above, one sales room, as well as the largest, completely equipped plant for the manufacturer of wood and metal caskets, burial garments and casket hardware, is located in Pittsburgh, the salesroom being at Seventh street and Duquesne way, and the plant on the North Side, the local manager being George Reatchlous. The plant at Pittsburgh, to which extensive additions were made in 1920, not only supplies wood and metal caskets, casket hardware, and burial garments for the territory immediately adjacent to Pittsburgh, but produces at this point the metal caskets and casket hardware distributed throughout the entire country, by the company through its various sales branches; and also supplies through its export department at New York, these goods for shipment to foreign buyers. Stock research by OldCompany.com (old stock certificate research service). About Specimen Certificates Specimen Certificates are actual certificates that have never been issued. They were usually kept by the printers in their permanent archives as their only example of a particular certificate. Sometimes you will see a hand stamp on the certificate that says "Do not remove from file". Specimens were also used to show prospective clients different types of certificate designs that were available. Specimen certificates are usually much scarcer than issued certificates. In fact, many times they are the only way to get a certificate for a particular company because the issued certificates were redeemed and destroyed. In a few instances, Specimen certificates were made for a company but were never used because a different design was chosen by the company. These certificates are normally stamped "Specimen" or they have small holes spelling the word specimen. Most of the time they don't have a serial number, or they have a serial number of 00000. This is an exciting sector of the hobby that has grown in popularity over the past several years.