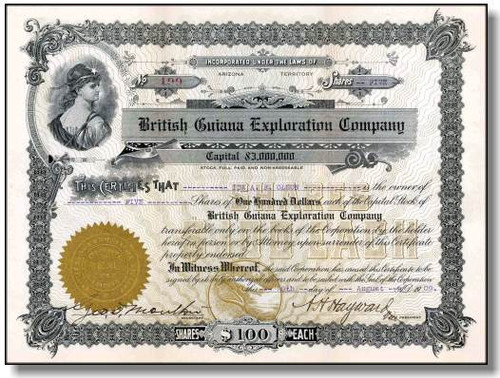 Beautifully engraved certificate from the British Guiana Exploration Company issued in 1909. The certificates says the company was incoporated under the laws of the Arizona Territory. This historic document has an ornate border around it with a vignette of an allegorical woman. This item is hand signed by the company's vice-president and secretary and is over 96 years old. Guyana is culturally and historically tied closely to the former British colonies of the Caribbean, although it is located on the South American continent. It was formerly known as British Guiana until 1966 when it received full political independence. Georgetown is the capital city, located on the north coast where the Demerara River flows into the Atlantic Ocean. The land of Guyana was first inhabited during the first millenium B.C.(Before Christ). The Warrau Indians were the first inhabitants of Guyana, followed by the Caribs and Arawaks. The Dutch established upriver settlements in the 17th century. In the following decades Dutch planters imported African slaves and began to move their plantations down river to take advantage of the fertility of the coastal soils. The three Dutch colonies of Essequibo, Berbice, and Demerara passed into British hand in 1814. Today, the largest group of people are the East Indians, numbering more than half the population. They are descended from the laborers brought from India between 1838 and 1917 as sugarcane estate workers. Afro-Guyanese make up more than one third of the population. There are also groups of Chinese and Portuguese that create the diverse population. Christianity and Hinduism are the main religions, with Islam as a minor.