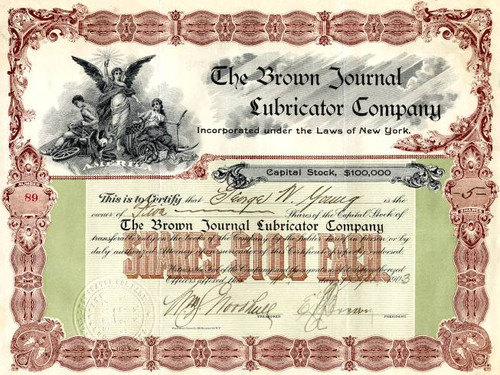 Beautifully engraved certificate from the Brown Journal Lubricator Company issued in 1903. This historic document was printed by the Brown-Green Company and has an ornate border around it with a vignette of an angel and an allegorical woman and man by her sides. This item has the handwritten signatures of the Company's President, Egbert B. Brown and Treasurer, and is over 108 years old.

Certificate Vignette
Patent number: 648065 Filing date: Jul 13, 1899 Issue date: Apr 24, 1900 Be it known that I, Egbert B. Brown, of Maywood, in the county of Cook and State of Illinois, have invented certain new and useful Improvements in Journal-Lubricators, of which the following is a specification. This invention relates to improvements in lubricators for 'railway-car or other journals of that class in which a lubricating mat or pad provided with wicks for drawing up the lubricant from a subjacent reservoir is supported in contact with the journal by a troughshaped basket that is resiliently held against the journal, as by being suspended by suit able springs from a supporting-frame work which is removably inserted in the journalbox, as shown, for example, in my United States Letters Patent No. 628,921. The invention contemplates improvements in such lubricator as a whole, improvements in the supporting-framework, and improvements in the pad or mat by which the oil is applied to the journal. It also particularly contemplates certain features which render the lubricator effective as a dust-guard for preventing the entrance of dust and dirt at the inner end of the journal-box through the opening out of which the axle passes... History from OldCompany.com (old stock certificate research service).