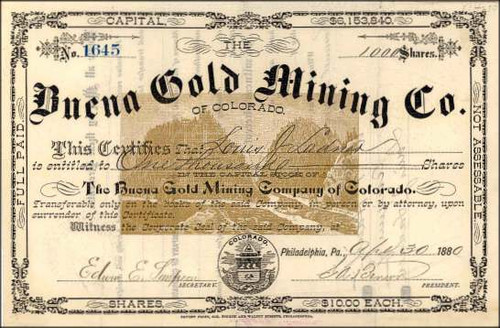 Beautifully engraved certificate from the Buena Gold Mining Co. issued in 1880. This historic document has an ornate border around it with an incredible gold gilt underprint of the the City of Jamestown, Colorado where the mine is located. Within the underprint is a diagram of mine shafts, tunnels and roads. Some of the landmarks include the Road to Boulder, Road to Smuggler Mine, Jim Creek, Jamestown Smelting Works, and more. This item is hand signed by the Company's President and Secretary and is over 135 years old. The certificate is uncancelled and in fine condition. 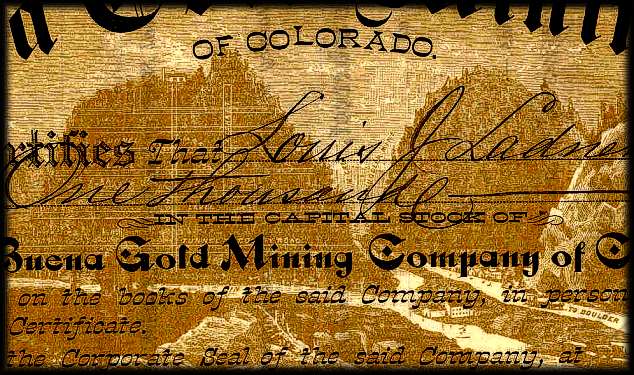 Certificate Underprint
The mine was located between Big Jim and Little Jim Creeks, just west of Jamestown. Jamestown is one of the oldest mining camps in Colorado and there is still some activity there. The first cabin built at the site was in 1860 by a George Zweck who worked the area for several years before some galena was found and the first rush began. About 400 miners populated the area but the boom lasted only three years and Jamestown was all but deserted for the next ten years. The second boom began in 1875 when some rich gold float was found. Up until 1915, the Jamestown district produced more than five million dollars in gold, silver, lead, copper and fluorspar. The latter mineral became important during the first World War and another fluorspar boom occurred during the second World War. The town had two large hotels, along with churches and a school, saloons, dance halls, gambling halls and parlor houses