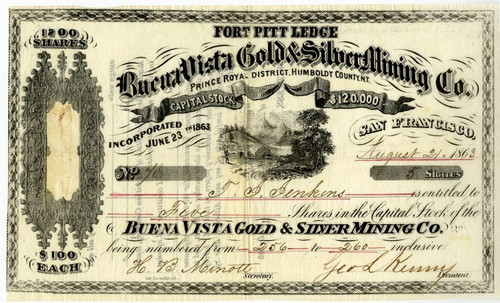 Beautiful certificate from the Buena Vista Gold & Silver Mining Co. issued in 1863. This historic document has an ornate border around it with a vignette of mountains and a mining camp . This item has the signatures of the Company's President, George L. Kenny and Secretary, H. B. Minott and is over 158 years old. This is the first time we have seen this certificate for sale. 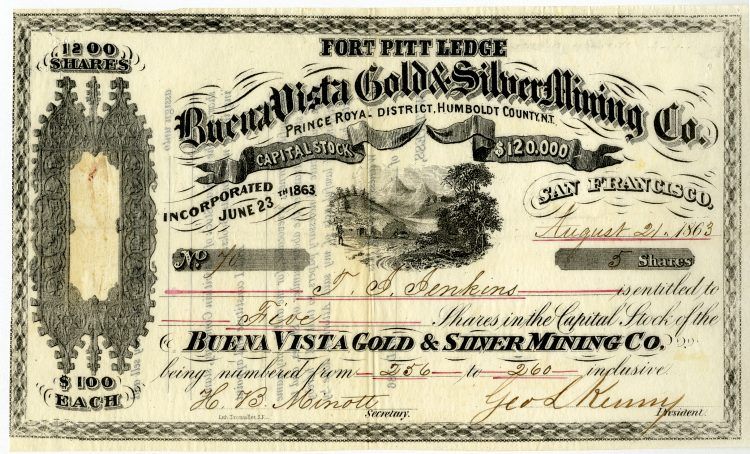 Certificate
HUMBOLDT DISTRICT, organized in 1860, has the honor of being the first in the county, is on the westerly slope of the Star range of mountains, about five miles from the river, two and a half from the Central Pacific Railroad, sixteen miles from Unionville, and one hundred and seventy-five miles from Virginia City. Humboldt Creek, forming Humboldt CaÃ±on which is four miles long, runs through the district. A strong vein or reef of limestone, in some places seventy feet high, crossing the caÃ±on, is one of the main geological features of the district. Several quartz veins running parallel to the limestone reef first called the attention of the prospectors to the mineral wealth of the district. On the lower side of the reef are the Reveille, Franklin, Santa Cruz, and Monte Christo veins. On the upper side, in a quartzite formation, are the Starlight, Calaveras, Sigel, Adriatic, Winnemucca, Washington, and Saint Bernard, occurring in the order mentioned. According to the reports of 1868, the Starlight had a vein ten feet wide; Calaveras, sixteen feet; Sigel, two feet, bearing gold; Adriatic, four feet; Winnemucca, twenty-four feet; Washington and Saint Bernard, four feet each. Nine mines were opened to a depth of fifty feet or more, and tunnels were driven into the mines at a great expense, but no large bodies of ore were found. During the panic of 1865 all work was suspended, though the claims were not wholly abandoned. In the winter of 1870-71 work was resumed on the Starlight and a mine called the Madia. At a depth of seventy feet the vein of the Starlight was four feet thick, standing nearly perpendicular. The Madia was in the foot-hills, and was a vast mass of quartz containing some gold, arsenic, and silver, the gold being four to nine dollars a ton through the mass. None of these mines ever became productive. With cheap timber, fuel, and labor, some of the mines may be put on a paying basis. During its best days the district contained about 500 inhabitants. Not far from the railway is a deposit of sulphur, left by an extinct thermal spring. The deposit of sulphur alternating with gypsum is about twenty-five feet across, and of uncertain depth. It has some economic value, but is more interesting as a relic of the geological formation of the country. History of Nevada, 1881, Thompson and West. Pages 443-460 Star City was a silver-mining boom town in Pershing County, Nevada. It was located in the Star Mining District. It is now a ghost town. The site is marked as Nevada Historical Marker 231. Star City was established in 1861 when rich silver ore deposits were discovered in the area. During its height from 1864 to 1865 the town was home to 1,200 people. It also housed two hotels, three general stores, a Wells-Fargo office, a church and more than a dozen saloons. The largest mine in the Star Mining District was the Sheba Mine, which produced about $5 million in silver by 1868. That same year the ore deposit began to run out. An 1868 account remarks on Star City: "So sudden was its decline that the daily mail, the express office and the telegraph office are all in operation yet, though the entire population consists of a single family." By 1871, only 78 people remained in Star City. Today the only reminders of the town are crumbling foundations and rusted mill equipment. Nevada History Although Spain claimed the Nevada region during the 1500s, no exploration occurred until the early 1800s. Native Americans living there at that time included the Paiute, Shoshone, and Washoe tribes. During the 1820s, trappers from the Hudson Bay Company explored the Humboldt River. Jedediah Smith traveled across the Las Vegas valley and William Wolfskill blazed the Old Spanish Trail into California. Complete exploration of Nevada occurred during the 1840s; John C. FrÃ©mont explored and charted the Great Basin and Sierra Nevada. At the end of the Mexican-American War (1846-1848), the southwest came under U.S. control. In 1850, the Utah Territory, that included Nevada, was established. Some of the first settlers came to Nevada during this time. In 1857, congress was asked to create new territory out of the "Great American Basin." This region included parts of eastern California, Arizona and what is now Nevada. The area was referred to as the "Territory of Sierra," "Carson Territory" or "Washoe Country." In 1858, it was proposed that Nevada would be carved out of western Utah but pro-slavery southerners stalled the bill. Finally in 1859, "the citizens of the western Great Basin met," seceded from the Utah Territory and created the territory of "Nevada." This was never recognized by congress however and so it was not until March 2, 1861, president Buchanan signed the bill creating the Nevada Territory. Territorial legislators met in Carson City in December of 1862, to create a State of "Washoe." But in November of 1863, when the delegates met to draft the constitution for the state of Washoe there was disagreement about the name. The other names that were considered were "Humboldt," "Nevada," and "Esmeralda." When the debate was complete, Nevada, the Spanish name for snowy or snow-covered was accepted. Nevada did not have a large enough population to become a state at the beginning of the Civil War (1861-1865). However, President Lincoln saw that most Nevadans were anti-slavery and that the North was in desperate need of silver and gold to help pay for the war. On Oct. 31, 1864, Nevada became the 36th state of the Union with Carson City as its capital. During the late 1860s, several miners settled the northwestern counties of Nevada. The following decade, mines closed as the value of silver dropped. Thousands of miners left Nevada looking for work, others turned to ranching. Mining Certificates from the Nevada Territory are quite scarce and highly desirable. History from Wikipedia and OldCompanyResearch.com.