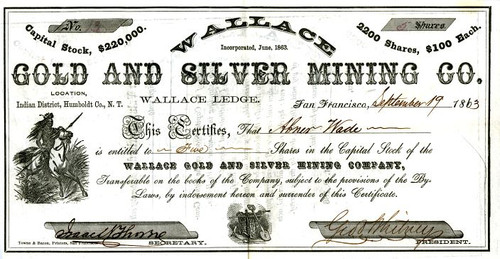 Beautiful RARE early stock certificate from the Wallace Gold and Silver Mining Co. issued in 1863 from the Nevada Territory. This historic document was printed by Towne & Bacon, San Francisco and has an ornate border around it with a vignette of an indian warrior. This item has the signatures of the Company's President and Secretary, and is over 149 years old. 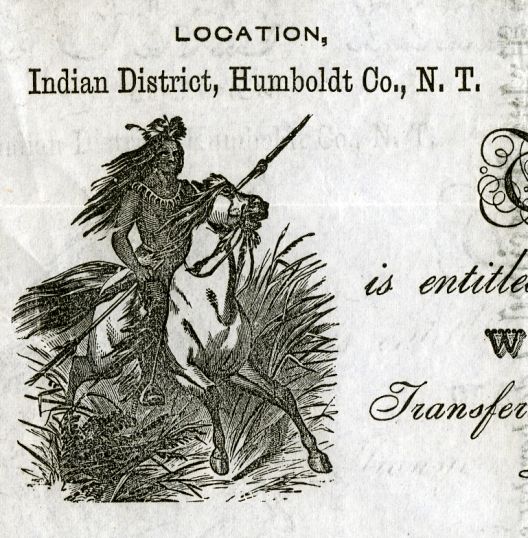 Certificate Vignette
In December of 1862 the Nevada Territorial Assembly passed the first corporations law of the territory. (Statutes, 1862: 162) The articles of incorporation named the purpose of the corporation, the amount of capital stock, the trustees, and the town or county which was the principal place of business. Copies of these articles were filed with the county clerk of the county of the place of business and with the Secretary of the territory. This act was repealed by the first State Legislature in 1865. (Statutes, 1865: 365). Certificates of Incorporation Volume 1, contains the articles of incorporation filed with the Secretary of the Territory from May 9, 1862 to August 1, 1863. Volume 2, contains filings from August 1, 1863 to May 16, 1864. Volume C, contains the articles filed from December 11, 1863 to October 31, 1864. Volumes and their indexes were microfilmed and copies were distributed to the Nevada Historical Society, Nevada State Museum and Historical Society, Special Collections Department of the University of Nevada, Las Vegas Library, and the State Library. The original documents that still exist are in the Nevada Territorial records in the State Archives. They are indexed by corporation name, names of individuals and date of filing in the Name Index to the Nevada Territorial Records, compiled by Charles A. M. Maze and published by the Nevada State Library and Archives in 1994. Nevada History Although Spain claimed the Nevada region during the 1500s, no exploration occurred until the early 1800s. Native Americans living there at that time included the Paiute, Shoshone, and Washoe tribes. During the 1820s, trappers from the Hudson Bay Company explored the Humboldt River. Jedediah Smith traveled across the Las Vegas valley and William Wolfskill blazed the Old Spanish Trail into California. Complete exploration of Nevada occurred during the 1840s; John C. FrÃ©mont explored and charted the Great Basin and Sierra Nevada. At the end of the Mexican-American War (1846-1848), the southwest came under U.S. control. In 1850, the Utah Territory, that included Nevada, was established. Some of the first settlers came to Nevada during this time. In 1857, congress was asked to create new territory out of the "Great American Basin." This region included parts of eastern California, Arizona and what is now Nevada. The area was referred to as the "Territory of Sierra," "Carson Territory" or "Washoe Country." In 1858, it was proposed that Nevada would be carved out of western Utah but pro-slavery southerners stalled the bill. Finally in 1859, "the citizens of the western Great Basin met," seceded from the Utah Territory and created the territory of "Nevada." This was never recognized by congress however and so it was not until March 2, 1861, president Buchanan signed the bill creating the Nevada Territory. Territorial legislators met in Carson City in December of 1862, to create a State of "Washoe." But in November of 1863, when the delegates met to draft the constitution for the state of Washoe there was disagreement about the name. The other names that were considered were "Humboldt," "Nevada," and "Esmeralda." When the debate was complete, Nevada, the Spanish name for snowy or snow-covered was accepted. Nevada did not have a large enough population to become a state at the beginning of the Civil War (1861-1865). However, President Lincoln saw that most Nevadans were anti-slavery and that the North was in desperate need of silver and gold to help pay for the war. On Oct. 31, 1864, Nevada became the 36th state of the Union with Carson City as its capital. During the late 1860s, several miners settled the northwestern counties of Nevada. The following decade, mines closed as the value of silver dropped. Thousands of miners left Nevada looking for work, others turned to ranching. Mining Certificates from the Nevada Territory are quite scarce and highly desirable. History from OldCompany.com (old stock certificate research service)