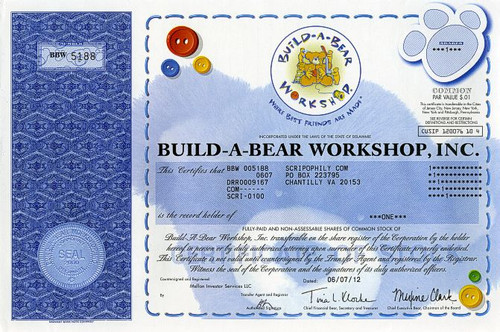 Beautifully engraved certificate from the Build-A-Bear Workshop, Inc. . This historic document was printed by the Midwest Banknote Company and has an ornate border around it with an image of the company's logo. This item has the printed signatures of the Company's Chief Executive Bear, Maxine Clark, and their Treasurer.

Certificate Image
Build-A-Bear Workshop (NYSE: BBW) is an American retailer headquartered in St. Louis, Missouri that sells teddy bears and other stuffed animals. Customers go through an interactive process in which the stuffed animal of their choice is assembled and customized during their visit to the store, and is the largest chain that operates in this style. The company has been acclaimed for the quality of its working environment, especially as a workplace for teenagers. The company's motto is "Where Best Friends Are Made". Build-A-Bear Workshop was founded by Maxine Clark in 1997, with its first store in the Saint Louis Galleria. By 2007, the store had sold over 50 million bears and had over 400 stores in operation worldwide in Australia, Belgium, Canada, Denmark, France, Germany, Japan, South Korea, the Netherlands, Norway, the Republic of Ireland, Poland, Russia, Singapore, South Africa, Sweden, Taiwan, Thailand, the United Kingdom and the United States, including Puerto Rico. While the majority of Build-A-Bear stores are in shopping malls, by 2008 the company had opened five stores in Major League Baseball stadiums. History from Encyberpedia and OldCompany.com (old stock certificate research service)