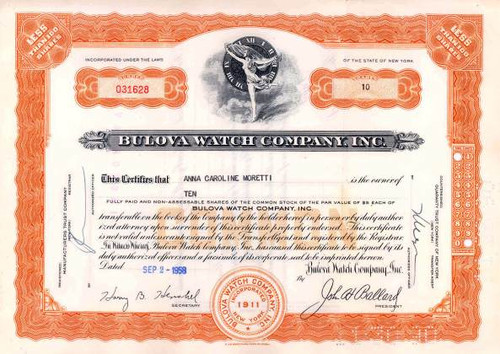 Beautifully engraved Certificate from the Bulova Watch Company issued in the 1960's. This historic document was printed by the American Banknote Company and has an ornate border around it with a vignette of a partially clothed woman in from of a clock. This item has the printed signatures of the company's officers and is over 32 years old. The certificate has been folded and is in nice condition. This is the first time we have had this for sale. 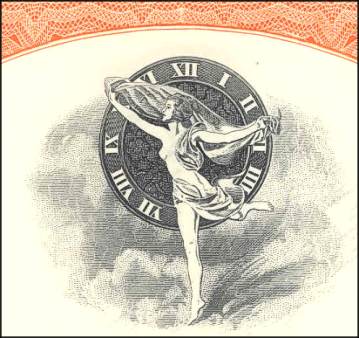 Certificate Vignette
BULOVA WATCH COMPANY (BULOVA/ACCUTRON/CARAVELLE) 1875 Joseph Bulova, a 23-year-old Czech immigrant, opens a small jewelry shop on Maiden Lane in New York City. 1911 Bulova begins manufacturing and selling boudoir and table clocks as well as fine pocket watches. These pieces are sold in unprecedented numbers. 1912 Bulova sets up its first plant dedicated to the production of watch components and their assembly into jeweled movements in Bienne, Switzerland. 1919 During World War I, the convenience of wristwatches (as opposed to pocket watches) is discovered. In 1919 Bulova introduces the first full line of men's jeweled wristwatches. 1923 The name Bulova Watch Company, Inc. is adopted. Bulova perfects a new concept in the watch industry with total standardization of parts. Every part of a Bulova watch is made with such precision (standardized to the ten thousandth part of an inch) that it is interchangeable with the same part in any other Bulova watch. This revolutionizes the servicing of watches in the industry. 1924 Bulova unveils the first full line of ladies' watches, including diamond accented pieces. 1926 Bulova produces the nation's first ever radio spot commercial, "At the tone, its 8 PM, B-U-L-O-V-A Bulova watch time." 1927 In honor of Charles Lindbergh's transatlantic solo flight from New York to Paris, Bulova ships 5,000 Lone Eagle watches, packaged with pictures of Lindbergh. The supply is sold out within three days. During the next few years Bulova sells nearly 50,000 of these commemorative watches. 1927 is also the year Bulova Watch Company goes public on the American Stock Exchange. 1931 Bulova conducts the watch industry's first ever million dollar advertising campaign. Throughout the Depression years, Bulova supports retailers by offering Bulova watches to buyers on time-payment plans. 1935 Joseph Bulova, founder of Bulova Watch Company, dies. 1941 Continuing its tradition of advertising firsts, Bulova airs the first television commercial: a simple picture of a clock and a map of the United States, with a voice-over proclaiming, "America runs on Bulova time." 1941 also marks the year that the Bulova Board of Directors adopts a resolution to manufacture products for national defense at actual cost. Throughout World War II, having perfected the skill of creating precision timepieces, Arde Bulova, Joseph's son, works with the U.S. government to produce military watches, specialized timepieces, aircraft instruments, critical torpedo mechanisms and fuses. 1945 The Joseph Bulova School of Watchmaking opens its doors to help disabled veterans learn watchmaking skills. 1948 Bulova begins developing the Phototimer, a unique combination of photo-finish camera and precision electronic timing instrument. 1950's Bulova develops a dating system for their watches. A letter followed by a number indicates the year of manufacture. L4=1954, M7=1967, N2=1972 and so on. 1952 Bulova begins developing Accutron, the first breakthrough in timekeeping technology in over 300 years. Accutron, the first fully electronic watch, promises to keep time to within 2 seconds a day. 1953 Recognizing a new trend in the watch industry, the self-winding and shock-proof watch, Bulova adds more of this type of watch to its line. Also added this year is the Bulova Wrist-Alarm, an entirely new kind of watch. 1954 Bulova introduces the "Bulova 23," a self-winding, waterproof , 23-jewel watch with an unbreakable mainspring, made entirely in the United States. 1955 An A.C. Neilson Co. Survey reveals that Americans see more national advertising for Bulova products than for any other products, in any other industry, in the world. 1956 Bulova completes negotiations to co-sponsor the Jackie Gleason Show, a one-hour live television show airing Saturday nights from eight to nine o'clock. This is the first time in history that any watch or jewelry allied industry has made a sponsorship commitment of such magnitude. 1959 Bulova offers an unprecedented 1-year warranty on all of its clock radios. 1960 NASA asks Bulova to incorporate Accutron into its computers for the space program. Bulova timing mechanisms eventually become an integral part of 46 missions of the U.S. Space Program. Also in 1960, Bulova reintroduces its redeveloped Phototimer clock, improved with updated photographic and electronic technologies. It features an infrared sensing element patterned after those used on heat-seeking missiles. Mounted on the starter's pistol, the Phototimer senses the flash of the gun and starts a timer clock at the same instant that the runners leave their marks. 1961 Accutron, the first watch to keep time through electronics, is introduced. It is the most spectacular breakthrough in timekeeping since the invention of the wrist watch. This revolutionary timekeeping concept of a watch without springs or escapement is operated by an electronically activated tuning fork. The Accutron watch goes on to become a presidential gift to world leaders and other dignitaries. President Johnson declares it the White House's official "Gift of State." 1962 The Accutron Tuning-fork watch becomes the first wristwatch certified for use by railroad personnel. 1962 is also the year that Bulova introduces its Caravelle line of jeweled watches. Designed to retail at $10.95 to $29.95, Caravelle competes with non-jeweled watches in the same price range. 1967 Accutron clocks are the only clocks aboard Air Force One. 1968 The Bulova Satellite Clock, the world's first public clock to display time controlled by time signals broadcast by orbiting satellites, is inaugurated by Gustavo Diaz Ordaz, President of Mexico. The clock is installed atop the Torre Latino Americana, Mexico's tallest skyscraper. 1968 also marks the year that Caravelle becomes the largest selling jeweled-movement watch in the United States. 1969 An Accutron watch movement is part of the equipment placed on the moon by Apollo 11 astronauts, the first men on the moon. A Bulova timer is placed in the moon's "Sea of Tranquility" to control the transmissions of vital data through the years. History is from Bulova's public information.