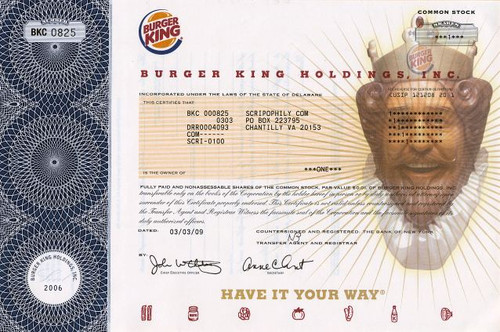 Beautifully engraved certificate from Burger King Holdings, Inc.. This historic document has an ornate border around it with a vignette of the Burger King Logo. This item has the printed signatures of the Company's President and Secretary.

Certificate Vignette
Burger King (NYSE: BKC), often abbreviated to BK, is a global chain of hamburger fast food restaurants. Burger King is headquartered at 5505 Blue Lagoon Drive in unincorporated Miami-Dade County, Florida, United States. The first restaurant was opened in Miami, Florida in 1954 by James McLamore and David Edgerton, and has since used several variations of franchising to expand its operations. Burger King Holdings Corporation is the parent company of Burger King; in the United States it operates under the Burger King Brands title while internationally it operates under the Burger King Corporation banner. It is a publicly traded company with investment firms of TPG Capital, Bain Capital and Goldman Sachs Capital Partners each owning about 25% of the company. At the end of its fiscal year 2008, Burger King reported that there are more than 11,550 outlets in 71 countries; 66% are in the United States and 90% are privately owned and operated. The company has more than 37,000 employees serving approximately 11.4 million customers daily.[4] In North America, franchises are licensed on a per store basis, while in several international locations licenses are sold on a regional basis with franchises owning exclusive development rights for the region or country. These regional franchises are known as master franchises, and are responsible for opening new restaurants, licensing new third party operators, and performing standards oversight of all restaurant locations in these countries; The largest example of a master franchise is Hungry Jack's, which exclusively owns, operates or sub-licenses over 300 restaurants in Australia. As with other multi-national corporations, Burger King has been involved in several legal disputes and cases, as both plaintiff and defendant, in the years since its founding in 1954. Situations involving a myriad of legal topics have affected all aspects of the company's operations. Depending upon its ownership and executive staff at the time, its responses to these challenges have ranged from a conciliatory dialog with its critics to a more aggressive opposition with questionable tactics and negative consequences. How the company responded to these various issues has drawn praise, scorn, and accusations of political appeasement. The Burger King menu has evolved from a basic offering of burgers, fries, sodas and milkshakes in 1954 to a larger, more diverse set of offerings that includes several variations of chicken, fish, salads and breakfast. The Whopper, a sandwich that has since become Burger King's signature product, was the first major addition to the menu by Mr. McLamore in 1957. Not all introductions have had the success of the Whopper; BK has introduced many products which failed to catch hold in the marketplace. Some products that have failed in the US have seen success in foreign markets, where BK has also tailored its menu for regional tastes. The company's "Golden Age" of advertising was during the 1970s when it introduced its mascot the Magical Burger King, a memorable jingle, and several well known and parodied slogans. Beginning in the early 1980s, its advertising began to lose focus; a series of less successful ad campaigns created by various agencies continued for the next two decades. In 2003, Burger King set about resuscitating its moribund advertising with the hiring of the Miami-based advertising agency of Crispin Porter + Bogusky (CP+B). They completely reorganized Burger King's advertising with a series of new advertisements centered on a resuscitated Magical Burger King character. History from Wikipedia and OldCompany.com (old stock certificate research service).