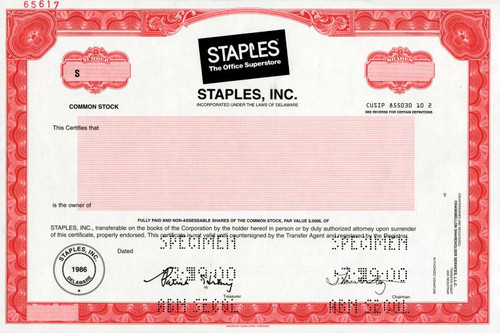 Beautifully engraved specimen certificate from the Staples, Inc. - The Office Superstore dated 2000. This historic document was printed by the American Banknote Company and has an ornate border around it with a vignette of the company's logo. This item has the printed signatures of the Company's officers. 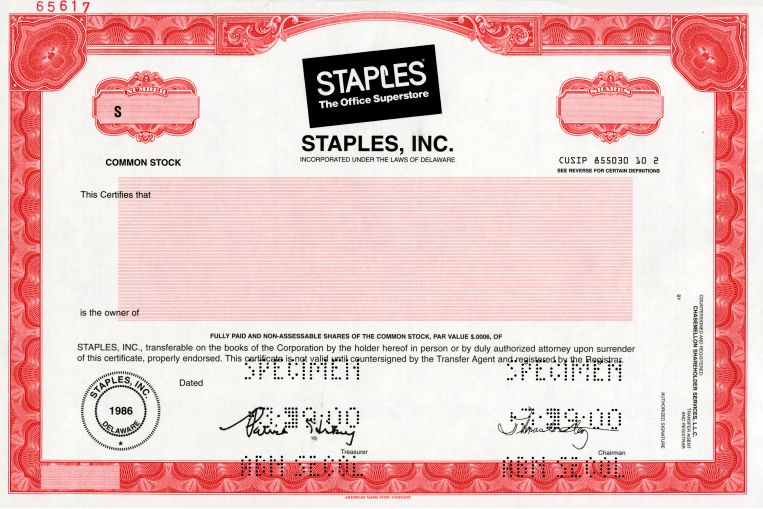 Certificate
Staples Inc. is a large office supply chain store, with over 2,000 stores worldwide in 26 countries. Based in Framingham, Massachusetts, United States, the company has retail stores, serving customers under its original name in Australia, Austria, Brazil, China, Finland, France, Germany, India, Italy, Norway, Portugal, the United Kingdom, and the United States, while operating subsidiaries in Argentina as Officenet-Staples, Netherlands as Staples Office Centre, Canada as Staples Canada (Bureau en Gros in Quebec), and in Italy as Mondoffice. Staples also does business exclusively with enterprises in the United States and multiple European countries as Staples Advantage. Staples sells supplies, office machines, promotional products, furniture, technology and business services both in stores and online. The company opened its first store in Brighton, Massachusetts on May 1, 1986. Staples opened its 500th store in Vero Beach, Florida on July 5, 1996, its 1000th store in Duluth, Georgia on July 31, 1999 and its 2000th store in India in 2007. History from Encyberpedia and OldCompany.com (old stock certificate research service) b>About Specimen Certificates Specimen Certificates are actual certificates that have never been issued. They were usually kept by the printers in their permanent archives as their only example of a particular certificate. Sometimes you will see a hand stamp on the certificate that says "Do not remove from file". Specimens were also used to show prospective clients different types of certificate designs that were available. Specimen certificates are usually much scarcer than issued certificates. In fact, many times they are the only way to get a certificate for a particular company because the issued certificates were redeemed and destroyed. In a few instances, Specimen certificates were made for a company but were never used because a different design was chosen by the company. These certificates are normally stamped "Specimen" or they have small holes spelling the word specimen. Most of the time they don't have a serial number, or they have a serial number of 00000. This is an exciting sector of the hobby that has grown in popularity over the past several years.