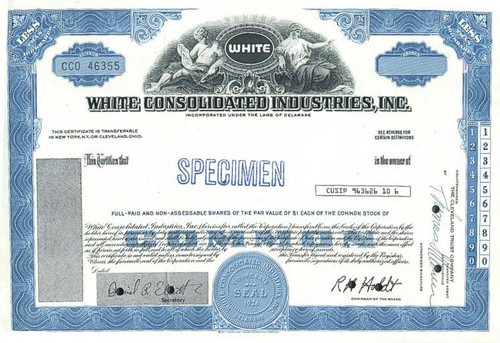 White Consolidated Industries Inc. Specimen Stock Certificate The White Sewing Machine Company was a sewing machine company founded in 1858 in Templeton, Massachusetts by Thomas H. White and based in Cleveland, Ohio since 1866. Founded as the White Manufacturing Company it took the White Sewing Machine Company name when it was incorporated in 1876. A rare White Gem (USA) from about 1887 In 1900, Thomas White's son, Rollin, developed a steam engine, using a corner of one of his father's factories to start building automobiles. In 1906 the automotive venture was spun off as its own company, the White Motor Company. By 1923, the White Sewing Machine Company had divested all side ventures to focus solely on sewing machines and accessories. By the early 1950s, however, White was losing money amid a flood of cheaper imported sewing machines and the loss of a supplier contract from Sears, which had represented 40 percent of White's business. Edward Reddig became company president in 1955, and he led an aggressive campaign of shifting manufacturing overseas, slashing domestic manufacturing and diversification. White moved heavily into appliances, tools and machinery, acquiring appliance brands such as Kelvinator (from American Motors), Gibson, Philco (from Ford Motor Company/GTE) and Franklin. The company took the name White Consolidated Industries in 1964. WCI purchased Westinghouse's major appliance business in 1975, which resulted in creation of the White-Westinghouse brand name. In 1979, WCI bought the Frigidaire appliance line from General Motors. WCI was acquired by Electrolux in 1986. In 2006 Electrolux spun off a number of its lines under the Husqvarna (including variations of the Husqvarna) brand name. The White line of sewing machines was consolidated into the lower end Husqvarna Viking brand after this spinoff. The White-Westinghouse brand name remained with Electrolux and that name is the only remnant of the "White Sewing Machine Company" name, however the brand line included no sewing machines. New White-branded sewing machines models have not been manufactured since the Husqvarna spinoff in 2006. Husqvarna Viking, Singer, and Pfaff brands are now all owned by SVP Worldwide. Though not advertised, SVP provides all of their user manuals for all of their brands including the "White" brand through the Singer brand website.