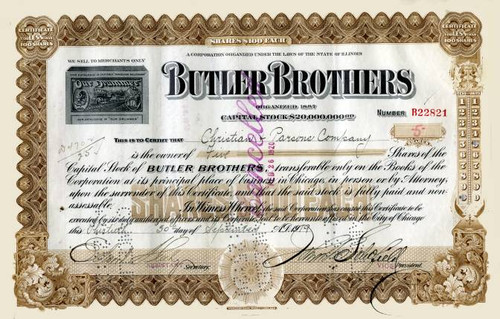 Beautifully engraved certificate from the Butler Brothers issued in 1919. This historic document was printed by the Western Banknote Company and has an ornate border around it with a image of the company's catalogue with the words "We Sell to Merchants Only". This item is hand signed by the Company's Vice President and Assistant Secretary and is over 93 years old. 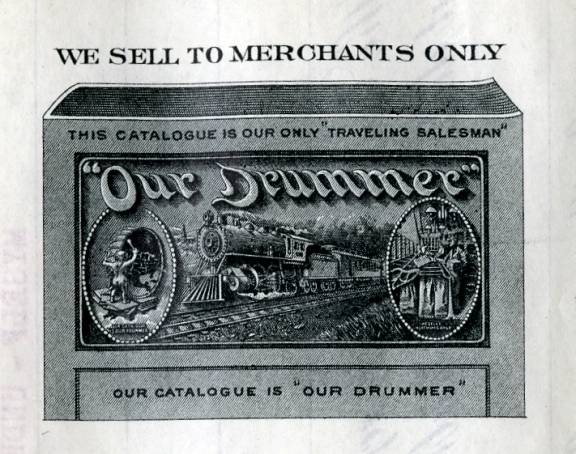 Certificate Image
Below is a story about the Butler Brothers from the American Storekeeper issued on December 25, 1888. The Department Store -- A Benefit to Mankind. Never in the history of the mercantile world has Anything created so radical a change in the methods of storekeeping as that of the Department Store System of the present day. The "Department Store" is the outgrowth of the cheap counter business originated by Butler Brothers in Boston about ten years ago. The little "Five Cent Counter" then became a cornerstone from which the largest of all the world's branches of merchandising was to be reared. It was the "Cheap Counter" which proved to the progressive merchant his ability to sell all lines of wares under one roof. It was the Five Cent Counter "epidemic" of '77 and '78 which rushed like a mighty whirlwind from the Atlantic to the Pacific, and all along its path transformed old time one line storekeepers into the wide-awake merchant princes of the present day. It was this same epidemic which made possible the world famed Department Stores of Houghton, of Boston; Macy, of New York; Wanamaker, of Philadelphia; and Lehman, of Chicago. To the casual observer the enormity of the volume of a year's business in this line may not be apparent, but from estimates procured from no less a reliable source that the great house of Butler Brothers itself, we learn that the surprising amount of $60,000,000 per annum is but a minimum calculation of the Sales of Department Stores' goods in the United States alone. The vast amount of good accomplished through the work of the Cheap Counter and Department Store is beyond calculation. There is no reader of these lines but should under obligation to the originators of this 19th century wonder for its results in bringing down the cost of more than ten thousand staple household articles to a "popular price" basis. It has enabled the poorest cottager to have a supply of working utensils at prices within her reach, instead of continuing the old method of making one article serve for a dozen uses. It has given the mechanic work, it has taught the business world the problem of quick sales and fair profits when combined with quantity purchasers. The mechanical labor on this class of merchandise is much greater in proportion to its monetary value than on any other production, and this business, when viewed from a labor standpoint, is one to be universally encouraged. Mr. Butler, of the well-known jobbing house of Butler Brothers, was asked by our representative to give him, if possible, the number of workmen required in the manufacturing of the enormous product which daily passes through this firm's hands, and it was shown that, including the 3,000 people in the manufactory of their staple and fancy goods in foreign countries, there were no less than 8,500 men, women and boys working every day in the on their wares alone. The cities and larger towns are rapidly being supplied with Department Stores. The merchants -- or rather far seeing ones - are learning that they must either take the initiative in this direction, or else leave the field open to some outsider, who may be looking for just such an opportunity and so ripe an opening. It is really astonishing to listen to Butler Brothers' recital of the many substantial successes made by customers with the smallest possible amounts of capital, in the Cheap Counter and Department Store Business. They tell us that in most cases the Department Store has grown out of a 5, 10 and 25 cent Counter beginning, and they mention the names of at least a dozen firms that had started but a few years ago with a mere nothing, and who, to-day, are rated at upwards of $100,000 each. We have quoted rather freely from Messrs. Butler Brothers in this article, and had we the space, we would feel justified in going still further by telling of the phenomenal growth of this estimable house, as well as the world famed business which it has created. We could preach a whole sermon with a text taken from their success on the "Possibilities of Printers' Ink as a Trade Solicitor," and our entire argument would be left with the single fact of the mammoth business of the house of Butler Brothers (New York and Chicago) having been done solely with the aid of their original "get up" in the shape of a price-list, called "Our Drummer," which they have been mailing free to all merchants during the past ten years, and that in ail this time they have never sent out a traveling man. Therefore, kind friends, take pride in the Department Store of your town and see to it that it is patronized in a liberal manner by rich and poor alike, and if the storekeeper be but the right sort of a merchant, and one disposed to build up a large trade by small profit inducements, you will soon discover that the town center has changed its base, and that the threshold of the Department Store is now the hub from which all people radiate. -- From the "American Storekeeper". History from OldCompany.com (old stock certificate research service)