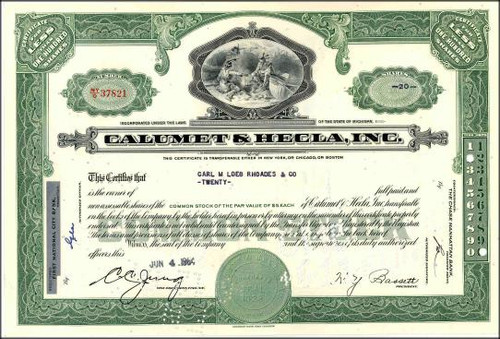 Beautifully engraved certificate from the Calumet & Hecla Incorporated issued not later than 1968. This historic document was printed by the American Banknote Company and has an ornate border around it with a vignette of indians sitting by a fire. This item has the printed signatures of the Company's President and Vice President and is over 31 years old. 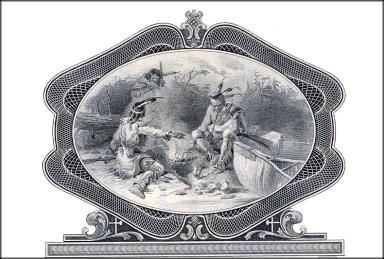 Certificate Vignette
Keweenaw National Historical Park with its rich heritage centered around the copper industry, Calumet and the surrounding areas displays a unique cross-section of cultures, architecture, industry, and history. The park is located in the middle of the Keweenaw Peninsula, which is surrounded by Lake Superior. Its only connection to the rest of Michigan's Upper Peninsula is the Portage Lift Bridge located between Houghton and Hancock. Reports of enormous copper deposits here ignited America's fast mining boom in 1843, a half dozen years before California's gold rush. By 1849, Michigan's Copper Country provided 85% of the entire United States copper production. These were the richest deposits ever discovered. The mines played an important role in America's Industrial Revolution and performed a crucial mission by supplying copper for military equipment during the Civil War. Between 1867 and 1884 the Calumet & Hecla Mining Company, based in Calumet, produced half the nation's copper. From 1889 and 1900, C & H paid out $57 million in dividends. The C & H surface plant was called the most efficient in the nation, with 50 steam engines in operation by the late 1890s. The Red Jacket shaft, at more than 8,000 feet in depth, was the deepest in the world. Calumet rest on top of hundreds of miles of shafts, tunnels and drifts. Between 1845 and 1967, the copper mines on the peninsula produced 11 million pounds of copper. Many thousands of immigrants, mostly from Europe, poured into the area between 1845 and 1910. The miners lived in company housing or in surrounding communities with names such as Red Jacket, Limerick, Sing Sing and Swedetown. C & H provided low-cost housing for the miners. By 1898 the company owned 1,000 dwellings. It also built schools, a library, bowling alleys, a community pool and bathhouse and a hospital. The immigrant's passing is reflected today by the neighborhoods, surnames, foods and traditions. The mine and community buildings constructed by the mining company are handsome structures, built of native red sandstone. Calumet is located on the Keweenaw Peninsula, which is about 50 miles long and 15 miles wide, on the northern most tip of Michigan. The native copper range forms a narrow spine along the peninsula. The most prominent feature is a 4 to 12 mile wide ridge that forms the copper range and represents a spectacular example of the 1.1 billion year old mid-continent rift. Its glacial topography is only slightly affected by erosion. Hundreds of ancient mining sites, mined in prehistoric times, also lie along the peninsula. Washington implemented the Keweenaw National Historical Park legislation in October 1992