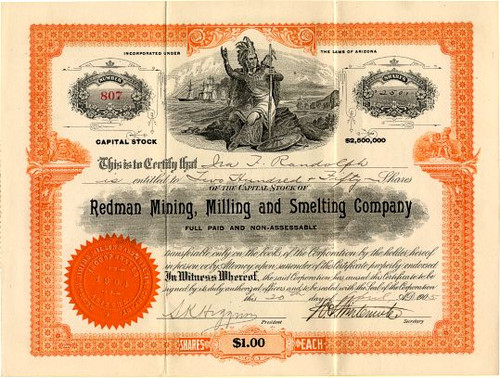 Beautiful certificate from the Redman Mining, Millng and Smelting Company issued in 1907 or earlier. This historic document was printed by Goes Company and has an ornate border around it with a vignette of an indian sitting next to a body of water with a sailing vessel in the background. This item has the signatures of the Company's President, S. Higgins and Secretary, W. T. Wintermute and is over 101 years old. 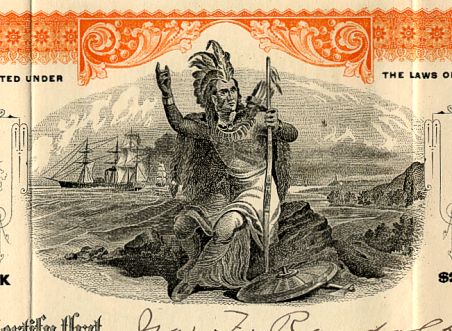 Certificate Vignette
The company's secretary W. T. Wintermute was a notorious stock promoter. Wintemute was arrested for fraudulent use of the mails. MINES AND MINING REPORT. Mining News from the Many Camps ARIZONA 1907 Reports from the camp of the Redman Mining, Milling and Smelting Company are to the effect that two important strikes were made in the Redman mine, which has encouraged the management to such an extent that plans are now under consideration that may develop into the erection of a mill and the opening of the mine to a good depth. On the 100-foot level a 30-inch vein of heavy sulphide ore has been uncovered, and in the 200-foot level 36 inches of the same character of ore has been struck in one of the drifts. Samples assayed show the average values to be about $50 to the ton. Reliable information reached here from the Bradshaw mountains of a very rich strike of high-grade silver ore made recently by Mrs. Jennie Clarke, the pioneer woman prospector of that region. The new find was made in the vicinity of the Great Peck mine, which has a record in silver production of over $3,000,000, although its vein has never been opened to any great extent below the 600-foot level. An extensive scheme of development is being planned by the management of the Alma-Empire Consolidated Mining Company, which recently took over under bond the Empire and Alma groups of mines, on Groom creek. The deal followed a thorough examination made of the Empire mine after the shaft was unwatered. The Empire shaft, now about 400 feet in depth, will be sunk to the 600-foot level, and the stamp mill overhauled and some new machinery added. A pump has been ordered for the Alma shaft, which will be unwatered as soon as the pump i.s installed, and sunk several hundred feet deeper. The Alma and Empire groups consist of fourteen claims, covering a series of gold bearing ledges that can be traced for some distance through the mountains, and out of which some of the highest grade ore ever mined in the district has been taken. The properties are located about six miles south of this city. Kingman -- Report coming from the Crow Canon mines is to the effect that a fine body of ore has been struck at a depth of thirty-two feet in the shaft, although it was not thought that ore would be reached until a crosscut was run at the 100 level. Handsome specimens of native copper have been taken from the shaft and much good copper ore is showing in the porphyry filling of the vein. Work is being pushed on the shaft and it is thought a depth of 100 feet will be reached early in October.