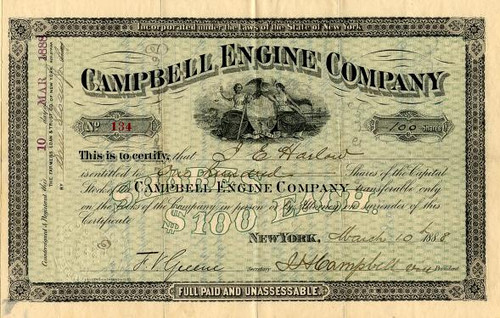 Beautiful certificate from the Campbell Engine Company issued in 1888. This historic document was printed by Homer Lee Bank Note Company and has an ornate border around it with a vignette of the New York State Seal. This item has the signatures of the Company's Officers and is over 132 years old.

Certificate Vignette
The Campbell Engine Company made an ammonia engine. Their headquarters were in the Mills Building on Broad and Wall Streets in New York. The Campbell ammonia engine worked with water with ammonia dissolved in it is heated to drive off the ammmona, which after its use in an engine is redissolved in the water. One advantage claimed is that the water was continually reused so there would be no scale deposition. However, the same applies to a conventional condensing steam engine. It indicated tha that ammonia served as a lubricant. See the article below: