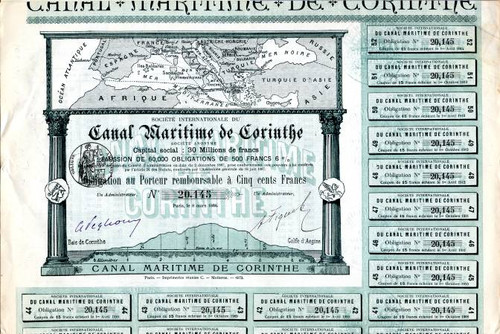 Beautiful certificate from the Canal Maritime de Corinthe issued in 1888. This historic document has an ornate border around it with a vignette map of the Mediterian. This item is hand signed by the projects administrators and is over 123 years old. 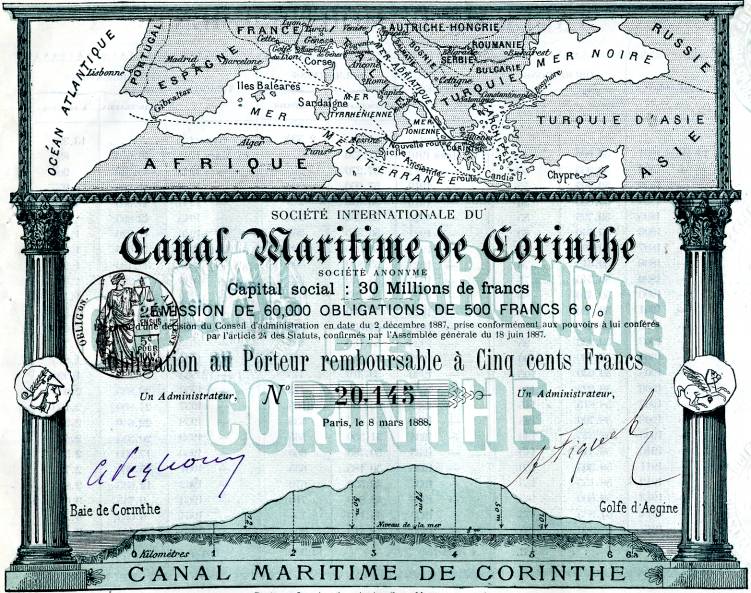 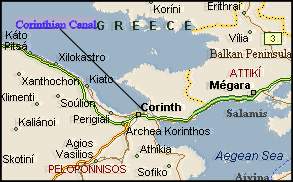 The Corinthian canal, built during the late Nineteenth Century, connected the Gulf of Corinth with the Aegean. It is only four miles in length and twenty three metres wide. It was completed between 1882 and 1893. Nero attempted the building of a canal in this place but his efforts met with failure. 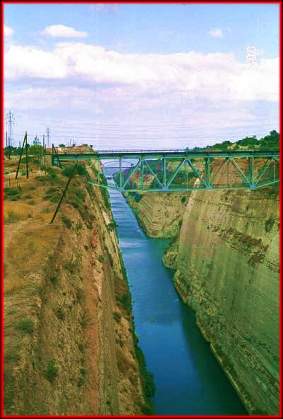 The canal is an amazing feat, precipitously deep, and in its few short blocks in length joins the Adriatic and the Aegean Seas. Its construction has saved the modern shipping industry from having to choose from one of two onerous alternatives: Unload all cargo and ship by rail or truck across the narrow Isthmus of Corinth and reload the cargo in another ship or sail entirely around the Achaian Peninsula, adding several days and much expense to the voyage. At one time Nero tried to cut a canal through the Corinthian isthmus. He failed in his attempt, but in 1893 a canal was cut, and ships can now go from Egypt to the Adriatic, and from the Adriatic to the Aegean through the Corinthian canal. Before that, small ships would be taken overland on rollers from port to port, while large ships had to be unloaded on one side of the isthmus and reloaded on the other side with the cargo being carried overland between the ports. No one wanted to make that additional 200 plus mile journey around southern Greece if they didn't have to and this little strip of land where Corinth was located was an ideal solution to that problem. But, it did have one major set-back. Once a ship came to port it couldn't cross that isthmus because there was no canal to get from the Aegean sea to the Adriatic, and vice versa. And they could almost see across this isthmus because it was only 4 miles wide at its narrowest point. What to do? Well, the best solution of course would have been to dig a canal, and in fact, Perisander in the sixth century B.C. came up with the idea, but because the technology at that time didn't make it cost effective, it didn't happen. So, he did the next best thing. He built a road of stone across the isthmus and gave it the name diolkos, a word which means a movable platform. It was a great idea. They would take the smaller ships and actually bring them out of the water and place them on these platforms with huge rollers and drag them from one side of the isthmus to the other. The larger ships were not as easily moved and so they would have to unload the cargo, haul it across this road and place it on another ship to continue its journey. But it was still faster and safer to do it this way then to have to sail all the way around the southern part of Greece.