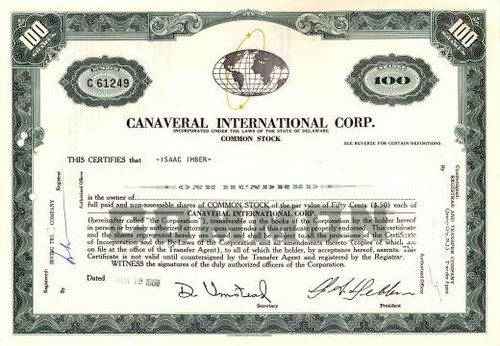 Beautifully engraved certificate from the Canaveral International Corp. issued in 1968. This historic document was printed by the Columbian Banknote Company and has an ornate border around it with a vignette of the company logo. This item has the printed signatures of the Company's President and Secretary and is over 37 years old.

Certificate Vignette
Madison Group Associates engaged in the manufacture & distribution of home fitness products, the development and production of programming for T.V., and the operation of a radio station in Amarillo, TX. For the 3 mos. ended 12/95, revenues rose from $29K to $1.7M. Net loss rose from $342K to $1.2M. Revenues reflect the 6/95 acquis. of MGA Fitness, Inc. and a rise in radio advertising revenues. Loss rose due to costs assoc. with the MGA Fitness, Inc. acquisition. UNITED STATES OF AMERICA before the SECURITIES AND EXCHANGE COMMISSION Securities Exchange Act of 1934 Release No. 41878 / September 15, 1999 Administrative Proceeding File No. 3-9826 In the Matter of MADISON GROUP ASSOCIATES, INC., Respondent ORDER MAKING FINDINGS AND REVOKING REGISTRATION PURSUANT TO SECTION 12(j) OF THE SECURITIES EXCHANGE ACT OF 1934 On February 10, 1999, the Commission instituted public administrative proceedings against Madison Group Associates, Inc. ("Madison Group"), pursuant to Section 12(j) of the Securities Exchange Act of 1934 (15 U.S.C. § 78l(j))("Exchange Act"). On March 31, 1999, the Order Instituting Public Proceedings and Notice of Hearing Pursuant to Section 12(j) of the Exchange Act of 1934 was served on the Respondent. Solely for the purpose of these proceedings and any other proceedings brought by or on behalf of the Commission or to which the Commission is a party, and without admitting or denying the findings set forth in the Order, except as to the Commission's finding of jurisdiction over Madison Group and the subject matter of these proceedings, which are admitted, consents to the issuance of the Order by the Commission which finds that: I. FACTS On the basis of the Order Instituting Public Proceedings the Commission finds that: A. Madison Group, formerly known as Canaveral International Corporation, is a Delaware corporation whose common stock is registered with the Commission pursuant to Section 12(g) of the Exchange Act (15 U.S.C. § 78l(g)). B. In February 1997, Madison Group entered a voluntary proceeding for reorganization under Chapter 11 of the United States Bankruptcy Court in the Southern District of Florida at Fort Lauderdale (Case No. 97-20522-BKC-RBR). Madison Group's bankruptcy proceeding has been converted to a Chapter 7 liquidation. The court appointed Trustee in Bankruptcy for Madison Group is Soneet R. Kapila. The Attorney for Madison Group in Bankruptcy is Mariaelena Gayo-Guitian, Esq., of Houston & Shahady, P.A., of Fort Lauderdale, Florida. C. Madison Group has failed to comply with Section 13(a) of the Exchange Act (15 U.S.C. §78m(a)) and Exchange Act Rules 13a-1 and 13a-13 (17 C.F.R. §§240.13a-1 and 13a-13) while its common stock was registered with the Commission in that it has not filed either Annual Reports on Form 10-K or Quarterly Reports on Form 10-Q for any fiscal period subsequent to its fiscal quarter ending December 31, 1995. D. Madison Group violated Sections 10(b) and 13(a) of the Exchange Act (15 U.S.C. §§ 78j(b) and 78m(a)) and Exchange Act Rules 10b-5, 13a-1, 13a-13 and 12b-20 (17 C.F.R. §§240.10b-5, 13a-1, 13a-13 and 12b-20) by including financial statements that failed to conform with Generally Accepted Accounting Principles, as required by Commission Regulation S-X, in its Annual Reports on Form 10-K for the fiscal years ended September 30, 1992, and 1993, and in its Quarterly Reports on Form 10-Q for the first three quarters of the fiscal year ended September 31, 1993, and for the first quarter of the fiscal year ended September 31, 1994. The financial statements failed to conform with Generally Accepted Accounting Principles by materially overstating the value of the corporate assets of Madison Group. II. FINDINGS In view of the foregoing, the Commission finds that it is necessary and appropriate for the protection of investors that the registration of Madison Group's common stock be revoked pursuant to Section 12(j) of the Exchange Act (15 U.S.C. §78l(j)). III. ORDER Accordingly, IT IS HEREBY ORDERED, pursuant to Section 12(j) of the Securities Exchange Act of 1934 (15 U.S.C. §78l(j)) that the registration pursuant to Section 12(g) of the Securities Exchange Act of 1934 (15 U.S.C. §78l(g)) of Madison Group's common stock be, and hereby is, revoked. For the Commission, by its Secretary, pursuant to delegated authority. Jonathan G. Katz Secretary SECURITIES AND EXCHANGE COMMISSION Washington, D.C. Securities Exchange Act of 1934 Rel. No. 41039 / February 10, 1999 IN THE MATTER OF MADISON GROUP, INC Administrative Proveeding File No. 3-9826 Administrative Proceedings Initiated to Revoke Registration of Microcap Stock The Securities and Exchange Commission announced today that it has instituted public administrative proceedings, pursuant to Section 12(j) of the Securities Exchange Act of 1934, to determine whether to revoke the registration with the Commission of the common stock of Madison Group Associates, Inc. ("Madison Group"). Madison Group, a microcap entertainment company, formerly based in Fort Lauderdale, Florida, is presently in a liquidation proceeding under the U.S. Bankruptcy Code. According to a complaint filed today by the Commission in U.S. District Court in Miami, Florida, Madison Group, from February 1992 through March 1994, dramatically overstated the value of its assets in financial statements filed with the Commission. Securities and Exchange Commission v. William T. Craig and Scott R. Sieck, No. 99-6165-CIV- Dimitrouleas (S.D. Fla. February 10, 1999). The unconven- tional assets at issue, including aging libraries of country music video programs, were obtained in exchange for Madison Group stock and were generally valued on the basis of overly optimistic projections about their commercial potential. This misstatement of asset values, the Commission's complaint alleges, allowed Madison Group to maintain a listing for its stock on the NASDAQ national market system and to sell its stock to the public at inflated prices. A hearing will be held before an Administrative Law Judge to determine whether the staff's allegations in the Order Instituting Proceedings are true and, if so, whether the company's registration should be revoked. This enforcement action is part of the Commission's four-pronged approach to minimizing Microcap fraud: enforcement, inspections, investor education, and regulation. For more information about the SEC's response to microcap fraud, visit the SEC's Microcap Fraud Information Center at: http://www.sec.gov/news/extra/microcap.htm.