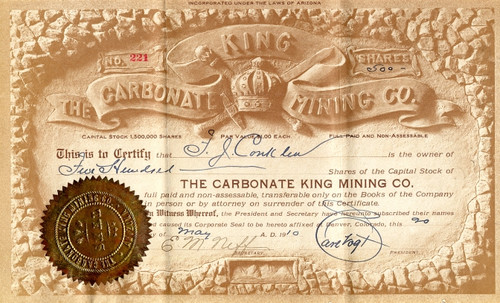 Beautiful certificate from the Carbonate King Mining Co. issued in 1910. This historic document was has an ornate rock border around it with a unique vignette of the company's name and a King's Crown with crossed swords. This item has been hand signed by the Company's President, C. Vogt and Secretary, E. M. Neff and is over 101 years old. The company was incorporatesd in Arizona.

Certificate Vignette
Colorado. Bureau of Mines - 1919 Gold Hill mines, close to the town of Guffey, included the Hillside lode, Jim Crow lode, Daisy Douglas, Gypsy Queen, Daydream, Black Mule, Bellevue mine, and Dora V. The Carbonate King, next to Gold Hill boasted a 185-ft shaft and a 4-ft vein of high-grade carbonate ore carrying free gold in 1896. Ore from the Carbonate King was shipped to the Dell mill on Four Mile for processing. One and a half miles The Carbonate King Mining Company, at Guffey, and the 4 J Mining Company, at Alma, ceased operation in 1917. The extremely productive Cripple Creek district contains the only ore deposits formed after the Laramide revolution that have been commercially important in the Front Range. Only a small output is credited to a few veins, notably the Carbonate King near Guffey, that cut Tertiary rocks outside the district. Because of the disparity in output and development of the Tertiary deposits, generalization concerning this group as a whole would have to be based almost entirely on the Cripple Creek district and might prove misleading in guiding work outside that area. It seems better, therefore, to give a few notes on the deposit near Guffey and follow them with a description of the major district. GUFFEY MINING DISTRICT - CARBONATE KING MINE By E. B. Eckel The Carbonate King mine is situated in Park County, sec. 1, T. 15 S., R. 73 W., about 2 miles north of Guffey and 20 miles west of Cripple Creek. It is opened alonir a small gold vein in Tertiary andesite. The surrounding area has been little studied, and the following information is based on a brief visit in 1932. The old Carbonate King inclined shaft, now caved, was 300 feet deep, and from its bottom a drift followed the vein northwestward for alxuit 600 feet. One ore body was found close to the shaft and another near the breast of the drift. According to Mr. A. B. Dell, of Guffey, who worked in the mine, the surface ore near the shaft contained about 1 ounce of gold to the ton. No data are available on the tonnage or gold content of the ore bodies in the bottom drift. The Carbonate King mine is on a 5-foot quartz vein, which trends N. 34° W. and dips 75°-80° NE. The vein is at least 1.500 feet long. Its only valuable metal is gold, which is said by Mr. Dell to occur both native and as sylvanite. Neither mineral was seen by the writer. The vein contains considerable pyrite and a little calcite and is said to contain some copper minerals, but none were observed on the dumps or in the vein. Sericite in small amounts is the only product of wall-rock alteration observed. The material on the dumps shows much limonitic material, but oxidation is believed to have been slight. The deposit is undoubtedly of Tertiary age and is probably related to the local intrusive center. Though some pockets of rich ore have been discovered and others probably exist, the ore on the whole seems to be irregularly distributed. History from StockResearch.pro (Professional Old Stock Certificate Research Service).