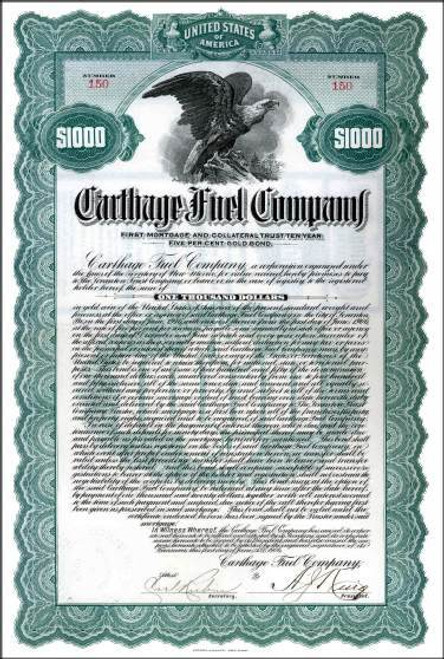 Beautifully engraved certificate from the Carthage Fuel Company issued in 1906. This historic document has an ornate border around it with a vignette of an eagle. This item is hand signed by the Company's President ( A. J. King ) and Secretary and is over 104 years old. Carthage has a history like no other. It was the site of the first coal mine worked in New Mexico. It was called the Government Mine and was worked by U.S. Army soldiers in the early 1860s to supply the needs of Forts Selden, Bayard, and Stanton. The Santa Fe Railroad constructed a bridge across the Rio Grande River to a point near Carthage. This nurtured the town into the busiest coal mining camp in New Mexico and in 1889 Carthage had a population of three hundred people. When Congress refused to issue a patent for a grant on which the mines were located, the Santa Fe Railroad tore up the tracks and moved Carthage lock, stock and barrel to Madrid in Santa Fe County. This happened in 1893. The site lay dormant until about 1903 when some citizens from San Antonio reopened to mines. Carthage awoke with new vigor. In the 1907, the population and risen to a thousand residents. The town was operated by the Carthage Fuel Company mainly to fire the Kinney brick kilns in Albuquerque. Farley was a limestone quarry.