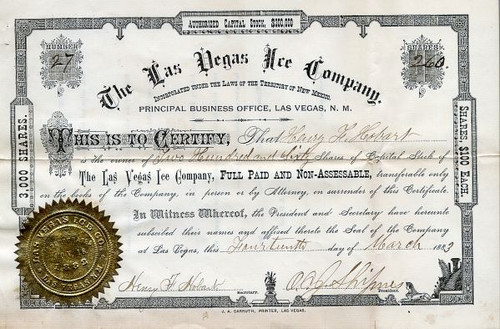 Beautiful certificate from the Las Vegas Ice Company issued in 1883. This historic document was printed by the J. A. Carruth Printer Company and has an ornate border around it with a vignette of the company name. This item has the signatures of the Company's President, O. C. J. Shipnes and Secretary, Henry F. Hobart and is over 126 years old.

Certificate Vignette
Las Vegas was established in 1835 after a group of settlers received a land grant from the Mexican government. The town was laid out in the traditional Spanish Colonial style, with a central plaza surrounded by buildings which could serve as fortifications in case of attack. Las Vegas soon prospered as a stop on the Santa Fe Trail. During the Mexican-American War in 1846, Stephen W. Kearny delivered an address at the Plaza of Las Vegas claiming New Mexico for the United States. When the railroad arrived in 1880 it set up shop one mile (1.6 km) east of the Plaza, creating a separate, rival New Town (as in Albuquerque). During the railroad era Las Vegas boomed, quickly becoming one of the largest cities in the American southwest. Turn-of-the-century Las Vegas featured all the modern amenities, including an electric street railway, the "Duncan Opera House" at the NE corner of 6th Street and Douglas Avenue, a Carnegie library, a major Harvey House hotel, and the New Mexico Normal School (now NMHU). Since the decline of the railroad began in the 1950s the city's population has remained relatively constant. Although the two towns have been combined, two separate school districts remain (West and East). History from Wikipedia and OldCompany.com (old stock certificate research service).