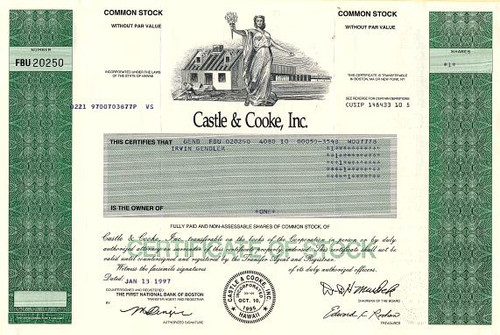 Beautiful certificate from the Castle & Cooke, Inc issued in 1997. This historic document was printed by American Banknote Company and has an ornate border around it with a vignette of an allegorical woman in front of a house under construction. This item has the printed signatures of the Company's Chairman, David H. Murdock and Treasurer and is over 10 years old. 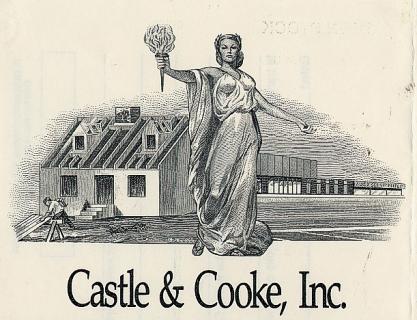 Certificate Vignette
Castle & Cooke, Inc. is a Los Angeles-based company that was once part of the Big Five companies in territorial Hawaii. The company at one time did most of its business in agriculture. Today, however, most of the company's business is in real estate and residential, commercial, and retail development. Castle & Cooke was founded as a partnership between Samuel Northrup Castle and Amos Starr Cooke as a department store that sold farm tools, sewing equipment, and medicine. Over the next few decades, the company invested heavily in Hawaii's surging sugar industry, running plantations in Kohala and Haiku. The company incorporated in 1894. In the 1910s, the company invested in Matson Navigation Company along with three other Big Five companies. In 1932, the company also bought a 21 percent of the Hawaiian Pineapple Company, which was later renamed the Dole Food Company. Castle & Cooke bought out Dole in 1961. The company maintained Dole's large pineapple plantations throughout the state, including a particularly large one on the island of Lanai, where Castle & Cooke owned about 95 percent of the island. In the decades that followed, Castle & Cooke began to face severe financial trouble as Hawaii's agriculture industry weakened. In 1985, the company merged with the Flexi-Van Corporation, a transportation leasing company. In 1991, the company was renamed Dole Food Company. In 1995, the real estate operations of The Dole Food Company were spun off as the newly reformed company Castle & Cooke. The new Castle & Cooke was bought by Dole CEO, David H. Murdock, who remains the CEO of Castle & Cooke today. History from Wikipedia and OldCompanyResearch.com (old stock certificate research service).