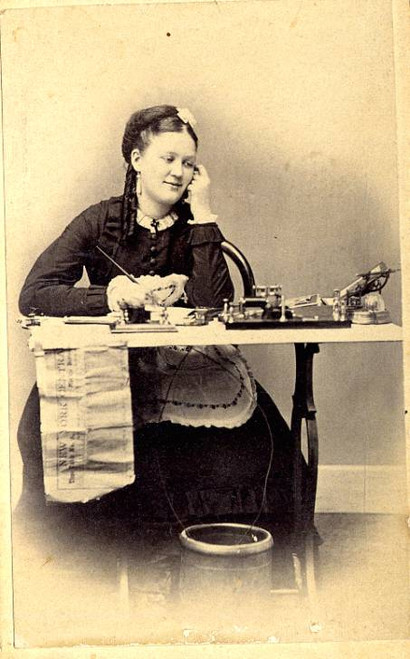 This photograph is of a young woman telegraph operator sitting at a table with the telegraph equipment in front of her listening and writing down transcriptions of the morse code with a long pen. A newspaper or Railroad timetable called the "New York Central" hangs off the front of the table. A cylinder on the floor in front of the woman under the table is a wet cell battery in a stoneware crock. It has wires coming out of it going through the table to the telegraph. There are 2 pieces of telegraph equipment in front of the woman. To the immediate right of the piece of the second piece of equipment is a fancy victorian inkstand. Woman is writing into a clipboard. Photo was taken by W.H. Masters of Marengo, Iowa. Measures roughly 2-1/2" X 4". 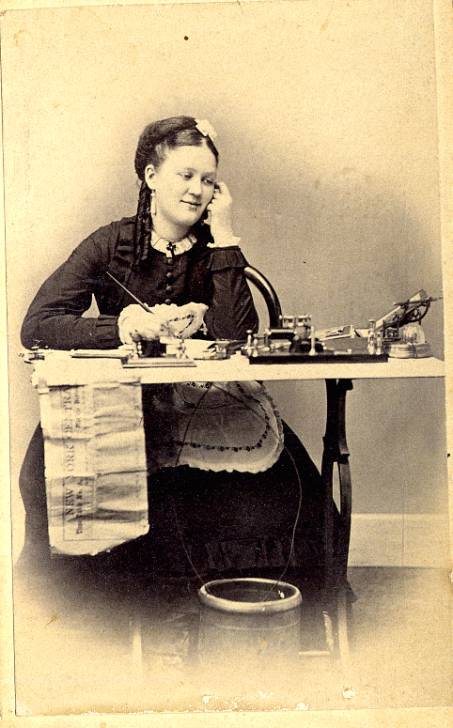 Women in telegraphy have been evident since the 1840s. The introduction of practical systems of telegraphy in the 1840s led to the creation of a new occupational category, the telegrapher, telegraphist or telegraph operator. Duties of the telegrapher included sending and receiving telegraphic messages, known as telegrams, using a variety of signaling systems, and routing of trains for the railroads. While telegraphy is often viewed as a males-only occupation, women were also employed as telegraph operators from its earliest days. Telegraphy was one of the first communications technology occupations open to women.