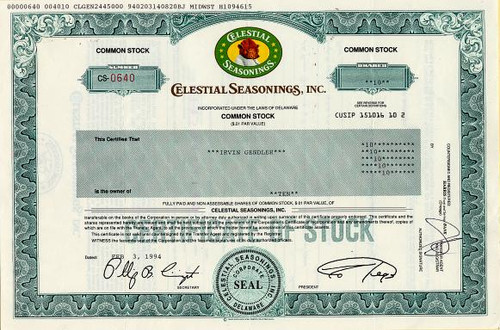 Beautiful certificate from the Celestial Seasonings, Inc issued in 1994. This historic document was printed by Northern Banknote Company and has an ornate border around it with a vignette of the company logo. This item has the signatures of the Company's President and Secretary and is over 13 years old. 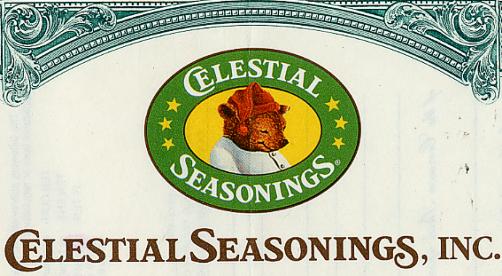 Certificate Vignette
Celestial Seasonings is a tea company based in Boulder, Colorado, United States that specializes in herbal tea but also sells green and black tea (as well as white and oolong blends). They account for over $100,000,000 in herbal tea blends sales in the United States annually. All of their teas are certified kosher and all-natural, and many are certified organic as well. The Boulder factory conducts free guided tours daily. Celestial Seasonings founders Mo Siegel, John Hay and others started gathering herbs and flowers in the mountains around Boulder and selling them to local health-food stores in 1969. In the 1970s the company grew rapidly, creating popular herbal tea blends (such as Sleepytime and Red Zinger) and moving to larger headquarters twice; they were selling internationally by 1977. Celestial Seasonings created and sponsored the Red Zinger Bicycle Classic race in Colorado during the 1970s. Celestial Seasonings was purchased by Kraft Foods in 1984 which expanded the marketing of the brand both nationally and internationally. Mo Siegel retired in 1986, and the next year, Kraft announced they would sell Celestial Seasonings to Lipton. The sale was successfully challenged by Bigelow under anti-trust laws, and local management purchased the company back from Kraft in 1988. In 1990 Celestial Seasonings moved into new headquarters in a custom-designed facility in North Boulder. Mo Siegel returned in 1991 to serve as CEO. The company continued to grow and introduce new products through the 1990s. Celestial Seasonings merged with natural food company The Hain Food Group in 2000 to become The Hain Celestial Group, Inc NASDAQ: HAIN. Mo Siegel retired for the second time in 2002. Celestial Seasonings is known to have more flavors of tea than most other tea companies, with new flavors being launched nearly every month. Some flavors do not sell well, and many flavors are discontinued at some point or are replaced with a new tea marketed for a higher success. For example, Melatonin PM was replaced with the incredibly popular Sleepytime which is one of their highest selling teas. Each box of tea is illustrated with often whimsical paintings or drawings - a different image for each flavor, intended to represent the feeling the tea produces to the consumer. The boxes also feature inspirational quotations from famous authors. In the past Celestial Seasonings has also offered decorative tins advertising their teas. History from Wikipedia and OldCompanyResearch.com (old stock certificate research service).