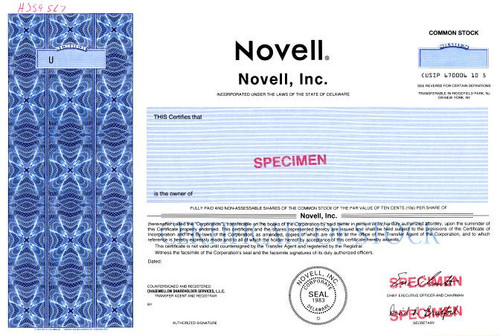 Beautifully engraved specimen certificate from the Novell, Inc.. This historic document was printed by the Security-Columbian United States Banknote Corporation and has anornate border around it with a vignette of the Company's name. This item has the printed signatures of the Company's Chief Executive Officer and Chairman, and Secretary. Novell, Inc. (pronounced /noʊˈvɛl/; NASDAQ: NOVL) is a multinational software and services corporation headquartered in Waltham, Massachusetts. The company specializes in enterprise operating systems, such as SUSE Linux Enterprise and Novell NetWare; identity, security, and systems management solutions; and collaboration solutions, such as Novell Groupwise and Novell Pulse. Novell was instrumental in making the Utah Valley a focus for technology and software development. Novell technology contributed to the emergence of local area networks, which displaced the dominant mainframe computing model and changed computing worldwide. Today, a primary focus of the company is on developing open source software for enterprise clients. Novell had long been rumored to be a target for acquisition by a variety of other companies. On March 2, 2010, Elliott Associates, L.P., an institutional investor with approximately 8.5% stock ownership of Novell, offered to acquire the company for $5.75 per share in cash, or $1 billion. On March 20, 2010, The company declined the offer and stated that the proposal is inadequate and that it undervalues the Company's franchise and growth prospects. Novell announced in November 2010 that it had agreed to be acquired by Attachmate for $2.2 billion. Attachmate plans to operate Novell as two units, one being SUSE. As part of the deal, 882 patents owned by Novell are planned to be sold to CPTN Holdings LLC, a consortium of companies led by MicrosoftAdditionally, the future owner anticipates no change to the relationship between the SUSE business and the openSUSE project as a result of this transaction. History from StockResearch.pro (Professional Old Stock Certificate Research Service). About Specimen Certificates Specimen Certificates are actual certificates that have never been issued. They were usually kept by the printers in their permanent archives as their only example of a particular certificate. Sometimes you will see a hand stamp on the certificate that says "Do not remove from file". Specimens were also used to show prospective clients different types of certificate designs that were available. Specimen certificates are usually much scarcer than issued certificates. In fact, many times they are the only way to get a certificate for a particular company because the issued certificates were redeemed and destroyed. In a few instances, Specimen certificates were made for a company but were never used because a different design was chosen by the company. These certificates are normally stamped "Specimen" or they have small holes spelling the word specimen. Most of the time they don't have a serial number, or they have a serial number of 00000. This is an exciting sector of the hobby that has grown in popularity over the past several years.