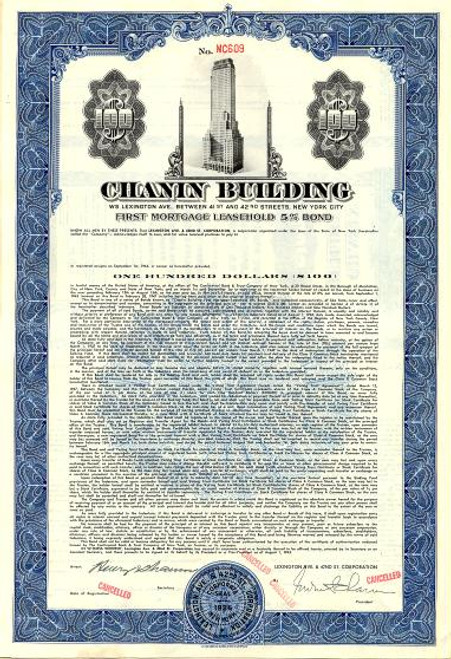 Beautifully engraved certificate from the Chanin Building issued in 1945. This historic document was printed by Columbian Bank Note Company and has an ornate border around it with a vignette of the Chanin Building. This item has the signatures of the Company's President, Irwin S. Chanin and Secretary, Henry I. Chanin and is over 61 years old. 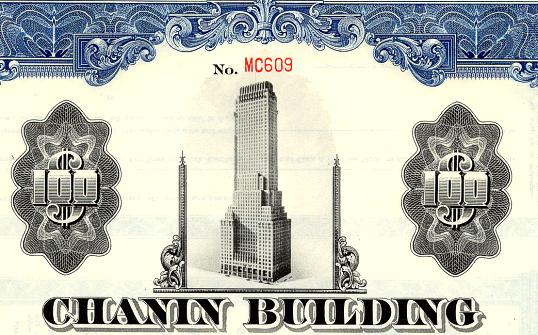 Certificate Vignette
Chanin Building - 122 E 42nd Street, Sloan & Robertson [1929] Built as a monument to Irwin Chanin, a graduate of Cooper Union who became a major New York developer of the 1920s, this 56-story tower was erected in just 205 days. The base of the building is decorated with the flattened, abstract ornament characteristic of the Art Deco period. All of the ornament was custom-designed for the building including a floral bas relief in terra-cotta by Edward Trumbull. In contrast to its neighbor, Grand Central Terminal, the Chanin Building's Art Deco facade represents a turn away from the Beaux Arts style towards a more humanistic and modern imagery appropriate to the industrial age. In particular, the facade illustrates the introduction of colored glass, stone and metal on the exterior of tall buildings. Materials such as bronze, Belgian marble and terra-cotta are used here in an inventive and exuberant way. Inside the lobby, the walls are decorated with reliefs by set-designer Jacques Delamarre and Renee Chambellan that represent "The City of Opportunity" and "The Active Life of the Individual," the latter perhaps a reference to Chanin's own rise to power and wealth. Above the base, the building's steel frame is clad in buff brick and terra cotta and it is set back in conformance with the 1916 Zoning Law. At the top, it is capped by a dramatic crown that was once illuminated at night. To attract tenants, Chanin provided centralized services at the base of the building including an underground connection to Grand Central Terminal and ground-floor commercial spaces. A movie theater and a subterranean bus terminal were included in the original project but no longer remain. Chanin himself had his own offices on the 50th and 51st floors of the tower that were famous for a theater and an award-winning bathroom.