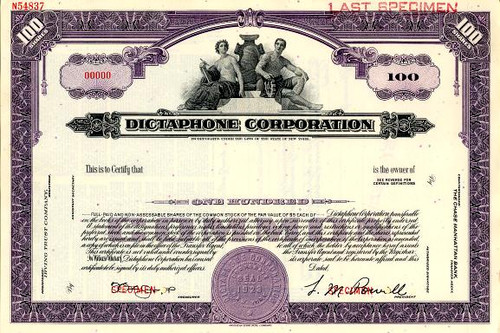 Beautiful engraved specimen certificate from the Dictaphone Corporation printed in 1945 . This historic document was printed by American Bank Note Company and has an ornate border around it with a vignette of an allegorical woman. This item has the printed signatures of the Company's President and Secretary.

Certificate Vignette
For well over a century, the Dictaphone name has been synonymous with excellence and innovation in business communications equipment. The company can trace its history back to 1881, when Alexander Graham Bell and two associates, took on their first team project -- finding a practical way of recording sound for the newly invented telephone. 1881 Alexander Graham Bell, his cousin Chichester Bell and Charles Sumner Tainter, a scientist and instrument maker, after working in the late 1870's on the problem of recording and reproducing sound for use with the telephone, produced the first recording device that used a rotating cylinder on whose wax coating a steel stylus would cut up-and-down grooves. 1888 Bell and Tainter formed the Volta Graphophone Co. in Bridgeport, Conn., and began to manufacture machines for the recording and reproduction of sound by businesses in office settings. 1907 the patent was sold to the American Graphophone Co., which eventually became the Columbia Graphophone Co, and the Dictaphone was trademarked by Columbia. 1923 Dictaphone Corporation was created from the old Columbia Graphophone Corporation. The new company flourished, creating the popular Dictaphone Telecord central telephone recording. 1939 the first electronic dictation machines were introduced. 1942 Dictaphone joined the war effort, as the U.S. government asked the company to develop a new technology that would record enemy communications to assist the military in their code-breaking efforts. As a result, Dictaphone developed the first specialized recording equipment, which soon became the world's first voice loggers. 1947 Dictaphone applied this new recording technology to commercial logging applications used in public safety and other commercial telephone recording applications. On the dictation front, the company introduced the Time-Master dictation machine, which replaced the older wax cylinder with the new plastic DictaBelt record. 1952 the first National Secretaries Week is proclaimed in June, with Dictaphone as the first sponsor. New innovations in recording continued as Dictaphone firmly established dictation as a time saver over handwriting and stenography among attorneys, physicians, and other professionals. 1957 the first portable dictation was introduced. Dictet recorder was a two-pound "portable" equipped with a magnetic cassette. 1972 the Thought Tank recorder combined dictation and transcription in a small, single unit with an endless loop of magnetic tape. 1973 the company introduced the Model 1111, its first minicassette dictation recorder and the Model 241, its first standard cassette unit. 1979 the company was purchased by Pitney Bowes. The Dictaphone name was retained and the company was operated as an autonomous, wholly owned subsidiary. 1984 Dictaphone enters the digital recording market with numerous products and solutions. 1995 Dictaphone Corporation was purchased from Pitney Bowes, Inc., by Stonington Partners for $462 million. 1996 Dictaphone Enterprise Express® digital dictation solution launched to hospitals nationwide. 1997 Over 75% of sales are from digital systems 2000 Lernout & Hauspie acquires Dictaphone. 2002 Dictaphone emerges from Chapter 11 as a privately held organization. One of the five oldest surviving US Brands History from Dictaphone Corporation Press information. About Specimens Specimen Certificates are actual certificates that have never been issued. They were usually kept by the printers in their permanent archives as their only example of a particular certificate. Sometimes you will see a hand stamp on the certificate that says "Do not remove from file". Specimens were also used to show prospective clients different types of certificate designs that were available. Specimen certificates are usually much scarcer than issued certificates. In fact, many times they are the only way to get a certificate for a particular company because the issued certificates were redeemed and destroyed. In a few instances, Specimen certificates we made for a company but were never used because a different design was chosen by the company. These certificates are normally stamped "Specimen" or they have small holes spelling the word specimen. Most of the time they don't have a serial number, or they have a serial number of 00000. This is an exciting sector of the hobby that grown in popularity over the past several years.