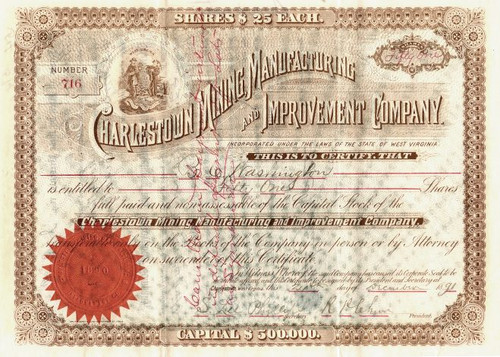 Beautiful certificate from the Charlestown Mining, Manufacturing and Improvement Company issued in 1891. This historic document was printed by Wm. F. Murphy & Sons Company and has an ornate border around it with a vignette of a seal of West Virginia. This item has the signatures of the Company's President, Roger Preston Chew and Secretary, S. Lee Philly and is over 121 years old. Issued to B.C. Washington and signed by him on the back.

Roger Preston Chew' signature
ROGER PRESTON CHEW (1843-1921). He was the president of Eagle Mfg Company. He was also a Confederate colonel who raised a battery of horse artillery, "Chew's Battery," which became part of the famous Laurel brigade under Jackson's command. He participated in all Jackson's campaigns until Jackson's death; and was promoted to chief of cavalry's guns serving through the Wilderness, Petersburg and Appomattox. In May 1890, the Charles Town Mining, Manufacturing & Improvement Company was formed by seven men to make Charles Town the industrial capital of the area. Roger Preston Chew was the founder of this company along with Frank Beck, Forrest W. Brown, T.C. Green, W.F. Lippitt, A.W. McDonald, and B.C. Washington. Mr. Chew, a 1861 graduate of Virginia Military Institute, served as a Lieutenant Colonel in the confederate artillery under General J.E.B. Stuart during the Civil War. He also served in the West Virginia Legislature from 1884 to 1890. The Charles Town Mining, Manufacturing & Improvement Company purchased 850 acres adjoining the western and northern corporate limits of Charles Town. The largest tract of this land was purchased from the Ranson family. James Matthew Ranson Jr. was born in Jefferson County in 1858 and was a farmer in the Charles Town district in the late nineteenth century. This area of Charles Town was thus named Ranson after the family that owned the largest tract and the community grew around the Belt Railroad, which bisects the area from east to west. The Belt Railroad was a spur between the Norfolk and Western Railroad and the Valley of Virginia Branch of the Baltimore and Ohio Railroad. On February 18, 1891, a Virginia Free Press news release reported that the Charles Town Mining, Manufacturing & Improvement Company had named and laid out streets and avenues. They included Boundary, Mineral, Buchannan, George, Samuel, Mildred, Preston, Reymann, Marshall, Lee, Forrest and Valley Streets. In addition, there were Railroad and Park Avenues and 1st through 13th Avenues, which ran at right angles to the named streets. Fairfax Avenue (later named Fairfax Boulevard) was a one hundred food wide street, which ran on a diagonal in a northeasterly direction through the community. Lancaster Circle was located at the intersection of Fairfax Avenue, 4th Avenue and Mildred Street. The 1890-91 map of the Charles Town Mining, Manufacturing & Improvement Company laying out the town was drawn by D.G. Howell, a civil engineer and landscape architect whose offices were located in the National Union Building of Washington, D.C. D.F. Taylor, whose title was "Principal Assistant Engineer", assisted him. In October of 1891, the offices of the Charles Town Mining, Manufacturing & Improvement Company were completed at a cost of $10,700.00. J.C. Holmes designed this imposing three-story stone and brick structure, and it was sold three years later to the Charles Town Board of Education for use as a school. Several factories were located in this area during this period. The 1892 Sanborn Company Insurance Map shows the A.D. Goetz Company, which produced harnesses, collars and saddlery employed 60 persons. Their factory was a forty-foot by one-hundred-food brick building located west of 2nd Avenue and George Street. In 1979 it was demolished after Dixie Narco purchased the Goetz Saddlery from Victor Products Corporation. Other industries included Shenandoah Brass and Iron Works located on Belt Avenue between George and Mildred Streets, the Elmer E. Beachley Saw and Planing Mill at the corner of George Street ad Belt Avenue, the John Farrin Boiler and Machine Shop at the corner of Preston and Belt Avenue and the Vulcan Road Machine Company which was also located at Preston and Belt Avenue. Construction on the one story "T" shaped frame building of the Shenandoah Brass and Iron Works (later named the Powhatan Brass and Iron Works) started on January 6, 1891 and was finished in April of 1891. It employed between fifty and sixty workers. One of the most significant early structures to be constructed in Ranson was the Hotel Powhatan located on 3.61 acres on 3rd Avenue between Mildred and Preston Streets. This four-story frame Queen Anne-styled building was designed by "Baldwin and Pennington, Architects" and was built by a local contractor, Julius C. Holmes, for $46,500.00. It opened in October of 1891, but by 1900 it had become the Powhatan College for Young Women. In 1913, it closed and in 1915 it re-opened as St. Hilda's Hall for Girls, a Christian School opened by the Episcopal Diocese under the direction of Maria Pendleton Duval. In 1921, a dormitory was added on property across the street from the original building. This new structure was know as Peterkin Hall and currently houses the offices of Columbia Propane. In 1921, with the stock market crash, the school closed and was converted into apartments. The original hotel structure burned to the ground of December 11, 1937. Early photographs of Ranson show the offices of the Charles Town Mining, Manufacturing & Improvement Company and the Hotel Powhatan, along with a few residential structures nearby. The community grew North from Lancaster Circle and by 1910, its residents decided to form their own town. On October 15, 1910, by a vote of 69 to 2, Ranson incorporated and three days later, it became a separate town from Charles Town. In 1936, the town of Ranson purchased the former Charles Town Mining, Manufacturing & Improvement Company building from Mr. Getzendauner for $3,000.00 and set up town offices within. By 1941, the population was 1,171. Ranson continued to grow and by 1950, the population had increased to 1,436. By 1970, that figure had increased to 2,189 and currently stands at 3,100. History from Wikipedia and OldCompanyResearch.com (old stock certificate research service).