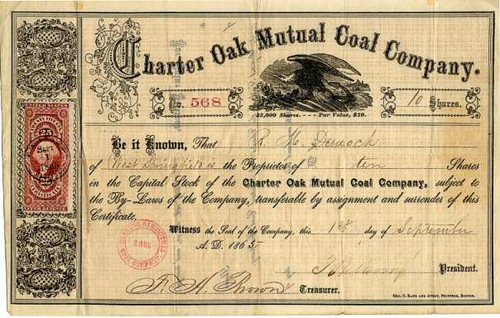 Beautifully engraved certificate from the Charter Oak Mutual Coal Company issued in 1865. This historic document was printed by George C. Rand and Avery Printers, Boston, Mass. and has an ornate border around it with a vignette of an eagle and a Civil War Era tax stamp attached to it. This item is handsigned by the Company's President and Secretary. Connecticut State Tree is the Charter Oak Deep-rooted in the historic tradition of Connecticut, the Charter Oak is one of the most colorful and significant symbols of the spiritual strength and love of freedom which inspired our Colonial forebears in their militant resistance to tyranny. This venerable giant of the forest, hundreds of years old when it hid the treasured Charter in 1687, finally fell during a great storm on August 21, 1856. Two English kings, a royal agent, a colonial hero and a candle-lit room are the figures and backdrop in one of the most thrilling chapters of America's legend of liberty. The refusal of our early Connecticut leaders to give up the Charter, despite royal order and the threat of arms, marked one of the greatest episodes of determined courage in our history. On October 9, 1662, the General Court of Connecticut formally received the Charter won from King Charles II by the suave diplomacy of Governor John Winthrop, Jr., who had crossed the ocean for the purpose. Twenty-five years later, with the succession of James II to the throne, Connecticut's troubles began in earnest. Sir Edmund Andros, His Majesty's agent, followed up failure of various strategies by arriving in Hartford with an armed force to seize the Charter. After hours of debate, with the Charter on the table between the opposing parties, the candle-lit room went suddenly dark. Moments later when the candles were relighted, the Charter was gone. Captain Joseph Wadsworth is credited with having removed and secreted the Charter in the majestic oak on the Wyllys Estate.