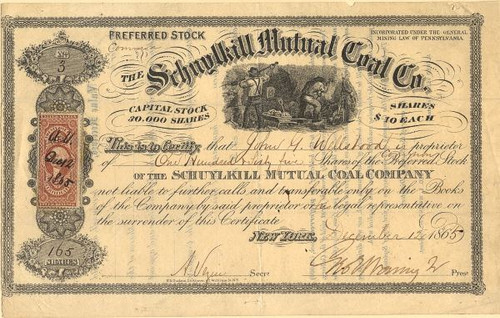 Beautiful certificate from the Schuylkill Mutual Coal Company issued in 1865. This historic document was printed by H.A. Graham Stationer Company and has an ornate border around it with a vignette of workers in a coal mine. This item has the signatures of the Company's President and Secretary and is over 144 years old. 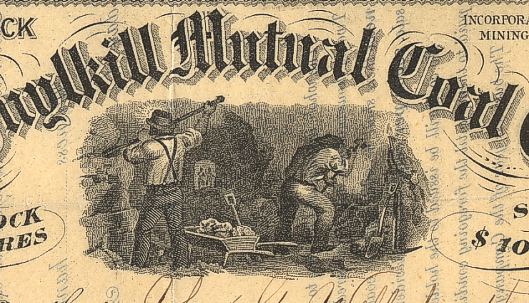 Certificate Vignette
The Tunnel Colliery was located south of the borough of ashland on the south side of Mahanoy Creek. The colliery was opened by a water level tunnel driven 250 ft. south to the north dip mammoth vein by Lewis P. Brock and Company in 1854. they mined the tunnel for 2000 ft. when the breasts became too short for profit- able mining. The first shipment of 5,572 tons was made in 1855. In 1856, they sunk the slope 360 ft. below the water level gangway to the first level and in 1857 they were sold out by the sheriff. In 1857, George S. Repplier and John Moody purchased the colliery at the sheriff sale and operated it to 1860 when they were sold out by the sheriff. The Union Coal Company bought the colliery and continued mining the first level to 1864 when they failed. They were succeeded by the Schuylkill Mutual Coal Company who mined the first level to 1869 when the level had been mined 4200 ft. to its boundaries. In 1869, Patterson and Eltringham extended the slope 300 ft. to the second or bottom level, a total length of 800 ft. from the surface. They mined the new level until 1871 when they failed. In 1871, General J.K. Siegfried and Stephen Harris leased the colliery and began making extensive improvements. They sunk two slopes on the north dip holmes vein, one a hoisting coal slope to replace the old mammoth vein slope and the other a pump and tender slope. The hoisting slope was sunk 690 ft. to the second level of the old slope. The tender slope was sunk 726 ft. to the same level. The colliery was then connected with the old workings of the Pioneer Colliery, and they began pumping water to the surface, from both collieries. In 1873, the Philadelphia & Reading Coal & Iron Co. began operating the combined collieries with the Tunnel Colliery gangway passing into the Pioneer Colliery working on a lower level and they continued mining to their boundaries. In 1879, they extended the hoisting & pump slope 310 ft. to the third level, a total length of 1000 ft. connecting with the mammoth vein by a tunnel 230 ft. south. In 1891, the colliery was abandoned as exhausted. The P&R C&I Co. drove two water level tunnels 1170 ft. each in 1924 and 1926 at different elevations to recover the unmined coal left by former operations. They continued to mine the veins to about May 1929 to their exhaustion. The total shipments from tunnel colliery was 1,717,691 tons.