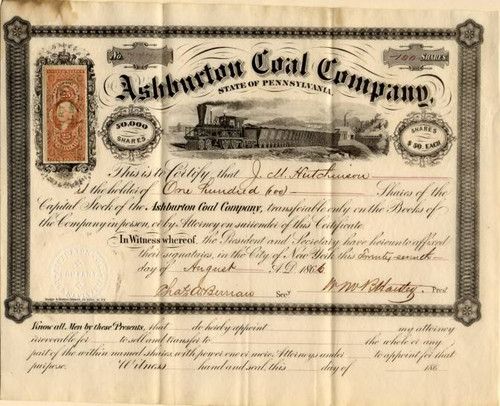 Beautiful certificate from the Ashburton Coal Company issued in 1866. This historic document was printed by the Dodge & Grattan Printers Company and has an ornate border around it with a vignette of a steam locomotive. This item has the original signatures of the Company's President, Major W. M. B. Hartley and Secretary, and is over 147 years old.

Certificate Vignette
OFFICE ASHBURTON Con. COMPANY, 32 Pine street, New York, March, 1866. To THE STOCKHOLDERS or THE ASHBURTON COAL COMPANY : Gentlemen--- When this Company was formed, the land forming the.basis of it, consisting of 5,882 acres of land, in the counties of Luzerne and Schuylkill, Pennsylvania, was underdeveloped, and covered with a heavy growth of pine and other timber. Dr. B. R. Mears, the first President of the Company, commenced operations by the erection of four dwelling-houses, and an exploration of the land for out-croppings of coal, which was known to exist on the property. He also ordered a. number of engines for the saw mill and slope. When I was entrusted with the control and management of the property, Mr. W. P. Pew being Superintendent, I consulted with Mr. J. S. McNair, the eminent engineer of the Hazleton Company, and with him visited the property, and decided upon sinking the slope where it now is. To those unacquainted with the mining and preparation of anthracite coal, for a market in the principal cities, and to those who purchased shares in this Company without such knowledge, and with reference to an immediate profit thereon as a stock operation, the progress of this work has doubtless appeared slow ; but I am glad that all who are familiar with such operations, and who have visited the property, village and works of Ashburton, express themselves in terms of unqualified praise of all they have seen. Our coal breaker, which is an enormous structure, nearly one hundred feet high, with its engines for hoisting, breaking and pumping, its hoisting gear, track, the slope or mine heavily collared and timbered to sustain the superincumbent pressure, are unsurpassed in the coal region. Our saw mill, with machinery for cutting lath, shingles and boards as well as square timber, has done a large amount of work, and is a substantial creditable structure. The houses, large and small, stables, car and blacksmith shops, drying-house, &c., are all of the first class ; not stuck together in a cheap and slovenly manner, but well and substantially built, commodious and comfortable for those who inhabit them, commanding a good rent from the tenants, and intended for such permanency as the development of the large and valuable property of this Company would render necessary. ' ' A large tract of land has been cleared ; all the lumber used in construction since the erection of the four first tenements, has been sawed at our own mill ; pump logs have been laid to all the houses and breaker. reservoir has been made for fresh water ; roads have been made, and the site of the village of Ashburton, about three and one-half miles west of Hazleton, on one of the highest summits in Pennsylvania, is healthful and attractive. We have had reason to know that the climate has been at times unusually severe, and that it had the effect of retarding the works ; but it has been pressed forward under the superintendence of Mr. Pew, with all the energy and diligence possible, and, after many disheartening obstacles, which we have been powerless to control, and which seem incidental to mining. I have the satisfaction to announce that we have opened and sunk three hundred feet on a vein of excellent anthracite coal, now ten feet thick, and apparently increasing in thickness, of a superior quality for steam purposes. The railroad from the mine to connect with the Hazleton Railroad is entirely graded ; the ties are being delivered, and Mr. J. S. McNair, the Engineer of the Hazleton Company, reports that he will lay the rails as soon as the frost is out of the ground ; as it is but three miles in length, but few days will be occupied in so doing, and we shall then be in a position to ship coal to Mauch Chunk, 21 miles distant, and one of the best markets for coal in Pennsylvania. This result will secure to the Company, not only permanent returns and profits from sales of coal, and restore its stock to its true value, but enable us to lease a number of mines to parties desirous of putting up their own works on the surrounding property of the Company. This property not only contains a vast body of coal in different beds and basins, and in millions of tons, but it has an abundant supply of the best timber for timbering the mines, and the erection of buildings. The saw-mill of this Company may be kept profitably employed for years to come, in preparing lumber for the wants of the settlers at and around Ashburton. I append a report made by Mr. Wm. Wright, the well known and reliable correspondent of the " New York Times," who recently visited the works in company with a committee of the Trustees and Stockholders. I submit an account of the expenditures up to the first of the present month. The 'Secretary of the Company, Mr. C. A. Berrian, has examined the accounts of the Superintendent at the mines, and finds them accurate. The Company is without incumbrance, and has on hand sulficient funds to put the works in paying condition. I confidently believe that all who have or will visit the property cannot fail to be impressed with its great value and be satisfied that the Ashburton Coal Company, (in spite of obloquy which attended its incorporation and a great portion of its development,) has been established as a success, and its works referred to as worthy of being imitated throughout the Anthracite region. I am, Gentlemen, Yours, respectfully, W. M. B. HARTLEY, P'res't. History from Encyberpedia and OldCompany.com (old stock certificate research service)