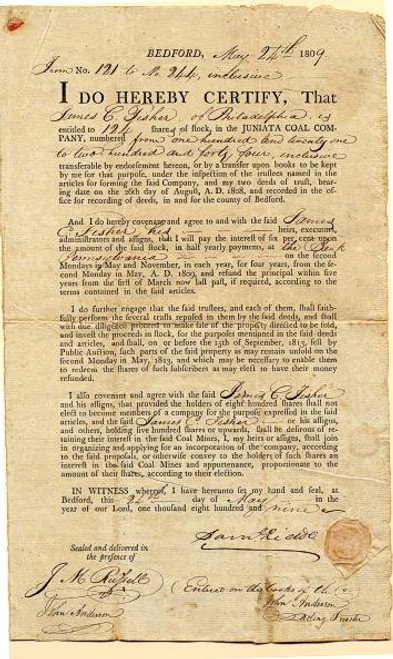 Beautiful certificate from the Juniata Coal Company issued on May 24, 1809 to James C. Fisher of Philadelphia for 124 shares of stock. This item has the signature of the Company's Officer, Samuel Riddle signed in the presence of J.M Rufult and John Anderson. This item is over 198 years old. 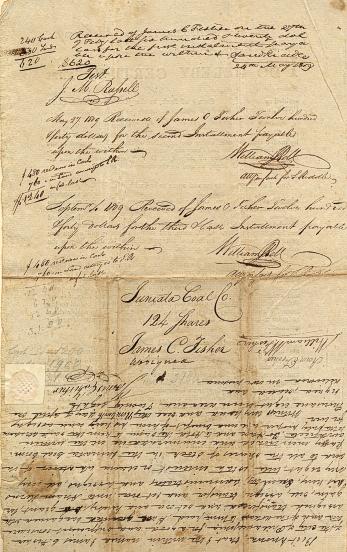 Back of Certificate
Samuel Riddle, son of James and Agnes Riddle, was born 1771 in Marsh Creek, York Co., PA. York became Adams Co. in 1800. Marsh Creek is now Gettysburg. Samuel Riddle was the first person to ship coal in PA and Riddlesburg, Bedford Co., PA, site of his mines, is named after him. Riddlesburg, named in honor of Samuel Riddle, its founder, is a place which has long existed. At least in name, although its history as a village dates only from the establishment of the furnaces. The land on which the village is situated was purchased by Samuel Riddle, who caused a town to be laid out and named Allensport, prior to 1800. He was the first man in Bedford county to ship coal from the Broad Top fields. Riddlesburg is a small village in Bedford County, Pennsylvania, west of Harrisburg, Pennsylvania, in the central region of Pennsylvania. The semi-bituminous coal-fields of the Broad Top mountain region lie in Huntingdon county and the northeastern part of Bedford county. The coal is of a superior quality, and is valuable both for coking and fuel purposes. The existence of this coal in Broad Top mountain has been known for at least a century, but not until within a recent period have important mining operations been carried on. The mines of this county are confined to two valleys, Six-Mile run and Sandy creek, both in Broad Top township. The vein that is worked contains about four feet of good mining coal. Most of the colleries are worked by means of drift-mining. The mines on Sandy run are exclusively of this kind. On Six-Mile run there are two shafts. The first mines were opened near Riddlesburg prior to the year 1800. Some shipments of coal were made at that time by means of "arks" of flat-bottomed river-boats. The business was carried ion by Samuel Riddle, one of the early lawyers of Bedford, his brother David superintending the work.
Dr. John Anderson (b. 1770, d. 1840) and various family members. Dr. Anderson was a graduate of Dickinson College, 1789, and of the University of Pennsylvania Medical School, 1791. At various times, Anderson was the prothonotary, register, recorder, commissioner, and deputy surveyor of Bedford County; president of the Juniata Coal Company and of the Allegheny Bank of Pennsylvania, Bedford; and an owner of vast acreage, some of which provided a right-of-way for the Chambersburg and Bedford Turnpike Company. The latter business operation was one of Anderson's most ambitious projects. Dr. Anderson devoted himself in the latter part of his life to the development of the famed Bedford Mineral Springs, records of which are included. His wife, Mary Espy Anderson (b. 1779, d. 1815), was a granddaughter of Colonel George Woods, who settled in Bedford in 1751, and a daughter of Colonel David Espy, an officer of the Revolutionary War and a delegate to the provincial convention held at Carpenter's Hall, Philadelphia, 1775. History from the Pennsylvania State Archives and OldCompany.com