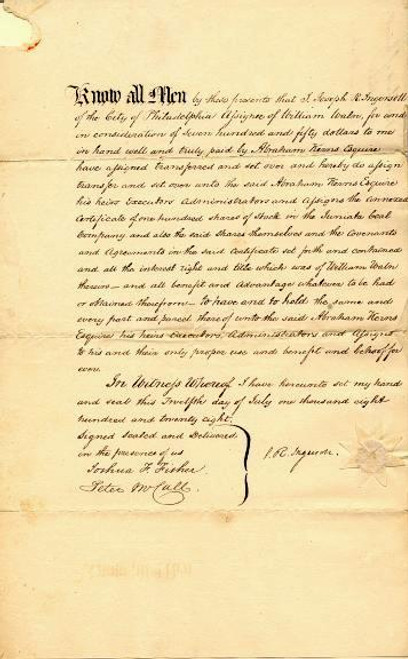 Transfer Agreement for one hundred shares in the City of Philadelphia dated in 1828. This item has the signatures of the J. Joseph R. Ingersoll, Joshus F. Fisher and Peter McCall, This document is over 179 years old. Juniata Coal Company was located in the Bens Creek Watershed which is in southwestern Pennsylvania, occupying the central portion of Cambria County. The community of Bens Creek, formerly a coal mining town, is located approximately 2000 feet upstream of the mouth of Bens Creek and S.R. 0053. Landuses within the watershed include, abandoned mine lands, forestland, agricultural land, reclaimed surface mines, refuse piles, and rural residential properties with small communities throughout the area. Joseph Reed Ingersoll (June 14, 1786 February 20, 1868) was an American lawyer and statesman from Philadelphia, Pennsylvania. First cousin once removed of Jonathan Ingersoll; son of Jared Ingersoll and Elizabeth (Pellet) Ingersoll; brother of Charles Jared Ingersoll; married, September 22, 1813, to Ann Wilcocks (1781-1831); second cousin of Ralph Isaacs Ingersoll and Charles Anthony Ingersoll; third cousin once removed of Laman Ingersoll; second cousin once removed of Colin Macrae Ingersoll and Charles Roberts Ingersoll; granduncle of Charles Edward Ingersoll; second cousin twice removed of George Pratt Ingersoll. Whig. Lawyer In 1835 he followed his father (Jared) and his older brother (Charles) to represent Pennsylvania in the U.S. House. He graduated from Princeton College in 1804. He studied law, was admitted to the bar and commenced practice in Philadelphia. He was elected as an Anti-Jacksonian candidate to the Twenty-fourth Congress. He declined to be a candidate for renomination in 1836. He resumed the practice of law. Ingersoll was elected as a Whig to the Twenty-seventh Congress to fill the vacancy caused by the resignation of John Sergeant. He was reelected as a Whig to the Twenty-eighth, Twenty-ninth, and Thirtieth Congresses. He was the chairman of the United States House Committee on the Judiciary during the Thirtieth Congress. He declined to accept the nomination as a candidate for reelection in 1848. He would serve in the Congress in 18351837 and again in 18411849. In 1852, President Millard Fillmore sent him to the United Kingdom as the U.S. Minister. He died in Philadelphia in 1868. Interment in St. Peter's Protestant Episcopal Churchyard. History from Wikipedia and OldCompanyResearch.com (old stock certificate research service).