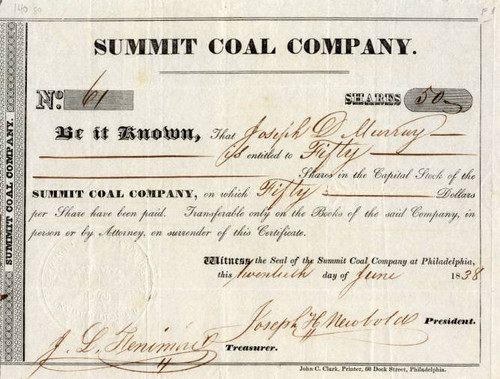 Beautiful certificate from the Summit Coal Company issued in 1838. This historic document ornate border around it with a vignette of the company name. This item has the original signatures of the Company's President, Joseph H. Newbold and Treasurer, and is over 175 years old. 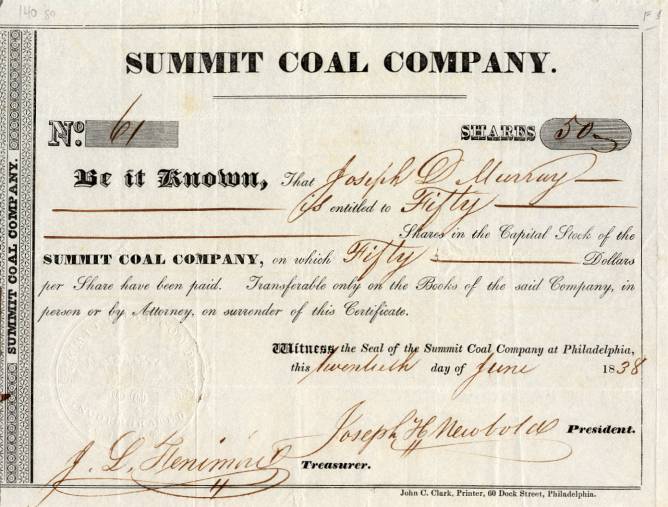 Certificate Vignette
SUMMIT COAL COMPANY. LAWS 1835-36. F. 116. MARCH 18, 1818. AN ACT to Incorporate the Summit Coal Company. Sec. 1. Be It enacted, etc.: That (certain named persons) and their associates, successors and assigns, be and they are hereby constituted a body politic and corporate by the name and style of the " Summit Coal Company," for the purpose of mining coal and for transacting the usual business of companies engaged In the mining, transporting to market and sellng of coal, and the other products of coal mines; * * * Sec. 2. The said company shall have the right to hold, either by purchase or lease, not exceeding two thousand acres of land at any one time, In Sugarloaf Township In the county of Luzerne, and Lausanna Township In the county of Northampton, In the Commonwealth of Pennsylvania, and In no other county or township, and the same or any part thereof, to sell or otherwise dispose of, as the interest of the company may require: Provided, That the said two thousand acres of land shall be In not more than two separate and distinct bodies: And provided also, That the company may hold, as above, such lot or lots of land, not exceeding three acres in any one place, as may be found convenient, as places of deposit in the transportation and sale of the products of thelr-mlnes. Sec. 3. The capital stock of said company shall consist of one hundred and fifty thousand dollars, and shall be divided Into three thousand shares of fifty dollars each, which capital stock shall only be employed in the purchasing and holding the lands aforesaid, with the improvements, If any thereon, and in constructing such other improvements, buildings, cars, boats, engines and machinery, as may be necessary or useful for the mining, transportation,'and sale of coal, and in the payment of such salaries, wages, and other expenditures as shall be requisite for the aforesttld purposes of the company; and such stock shall be assignable nnd transferable, according to such rules as the board of directors shall establish. ******* Sec. 11. The company hereby Incorporated shall have power to construct a railroad, with one or more tracks, from any point on their lands, to Intersect the Beaver Meadow Railroad, or any railroad which may be made in the valley of Hazle Creek, at such place as they may deem most convenient; and for that purpose they may Increase their capital stock or borrow one hundred thousand dollars; and the said company shall have the same powers and Immunities, and be subject to the same terms and conditions, that are provided in the act to Incorporate the Beaver Meadow Railroad and Coal Company, and the supplements thereto: Provided, That the said railroad shall be commenced within one year, and completed within three years after the passage of this act ******* POWERS EXTENDED--FIBST SUPPLEMENT. LAWS 1838-39, P. 187. MARCH 25, 1839, A SUPPLEMENT to the act entitled "An act to Incorporate tbe Summit Coal Company," passed tbe 18th day of March, A. 1>, 1836. Sec. 1. Be It enacted, etc.: That the Summit Coal Company may apply any portion of one hundred thousand dollars, capital stock which they are authorized to create for the purpose of constructing a railroad, which may remain unexpended after the completion of said road in making tunnels, drifts, Inclined plaiies, and other fixtures and improvements necessary or convenient in carrying on tbe operations of said company. And that the time in which the said company is required to complete their road is hereby extended to the first of September next TIME EXTENDED--SUPPLEMENT. LAWS 1839-40, P. 334. APRIL 16, 1840. A Fl KTII i:u SUPPLEMENT to the act entitled, "An act to incorporate the Summit Coal Company," passed the 18th day of March, A. D., 1638. Sec. 1. Be it enacted, etc.: That the time in which the "Summit Coal Company," Incorporated by the act to which this is a further supplement, is required to complete their railroad, is hereby extended to the first day of September, 1844. History from OldCompany.com (old stock certificate research service)