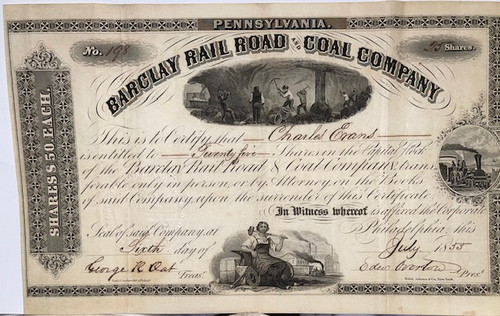 As with many railroads, the Susquehanna and New York Railroad formed from an earlier company, absorbed companies during its heyday, and was later itself absorbed before being torn up to help with the war effort during World War II. The story of the S&NY starts in 1794 when Robert Barclay of London, England came to own 21,000 acres (85 km²) in the region. Little development occurred until coal was discovered on the land. Professor Johnson or Richard Taylor (or possibly both) surveyed the land for a railroad about 1835, but no road was cut and access to the coal was still limited. 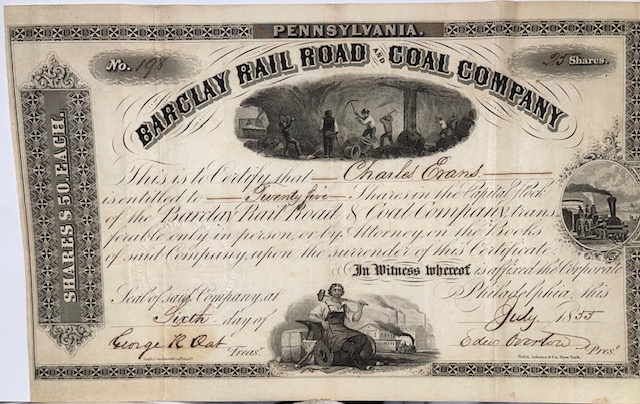 The "Towanda and Franklin Railroad Company" was formed in 1853 to create a railroad to the coal mines but no rails were laid. In 1854 the Barclay Railroad and Coal Company formed, and work on the road began. The Barclay Railroad was authorized to hold 2,000 acres (8 km²) of coal lands as well as lands for track, depots, and stations, etc.

Letter From the President To the Stockholders of the Barclay Railroad and Coal Co.:

The Barclay Railroad and Coal Company, by their Charter, are authorized to hold 2,000 acres of coal lands, as also lands for their railroad, depots, termini, etc., and their capital stock limited to $1,4000,000.00.

We have purchased from the individuals composing the Schraeder Land Company for  the sum of $4000,000.00, two thousand acres of "Coal Lands", together with the "Mineral Rights" on five hundred acres more; containing not less than 10,000,000 tons, and most probably about 13,000,000 tons of coal. The land is covered with a dense forest of hemlock, beech, maple and cherry timber, with some pine and oak.

The Road is let, on favorable terms for the Company, to Messrs. V. E. and J. E. Piollet, two very able, energetic and efficient contractors, who will, no doubt, fully build and finish it before the first of June, 1856 (the time mentioned in their contract) and without allowance or claim for extra work.

The capital stock of the company at present is $600,000.00, which is contemplated to be now increased to $7000,000.00, a sum fully adequate to pay for all the lands (including the right of way) and twenty-four acres at the terminus of the Road in the borough of Towanda; to completely finish the Railroad, and pay for the locomotives and all the rolling stock; in short, to build the Road, and equip it in all respects ready for business.

The purchase of lands of the Railroad has been made at a low valuation (even if a railroad were not about to be built) and without any charges for making such purchase.

I give to the Company an assurance, as strongly based as any such assurance can be, that on the first day of June, 1856, their railroad, depots and water stations will all be completely finished and ready for business; that the locomotives, passenger and coal cars will then all be on the ground, and 10,000 tons of coal already mined; and that all these, with the right of way and grounds for depot and basin will be paid for, or provision made for their payment, without exceeding the $300,000.00 which will have been applied for that purpose. Thus sixteen and a half miles of a good permanent railroad with bridges, sidings, right of way, twenty-four acres of land at the terminus of the Road, a chute of about 200 feet in length, locomotives and rolling stock, water tanks, and the necessary buildings at the depot, together with the salaries of the Engineer and his corps, will be fully paid for and settled within this amount.

It is a gratifying fact, that, throughout the whole operations of the Company, not a single dollar has been paid to any officer of it (other than the Engineer) for services of any kind, from the first to last, nor for legislature or charter; neither has any one connected with the Company received, either directly or indirectly, any private benefits or advantage in any of the purchases of the right of way, or other lands bought by the Company.

I feel flattered by the station in which your favors have placed me; and it will give me as much satisfaction to see this great undertaking completely accomplished in a manner wholly without precedence, and free from debt, as a failure in the least of its parts would fill me with mortification and regret.

I am, gentlemen, your most obedient servant.