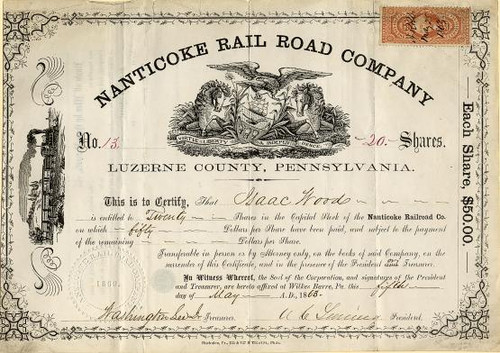 Beautiful RARE certificate #13 from the Nanticoke Rail Road Company issued in 1863. This historic document was printed by Haehnlen Printers and has an ornate border around it with a vignettes of two horses on the side of a shield with a ship and a train. This item has the signatures of the Company's President and Secretary and is over 143 years old.

Certificate Vignette
Wealthy businessmen in Wilkes-Barre were first to exploit the profitable anthracite market. They organized independent coal companies and established local mining operations as far south as Hazelton in the Lehigh Coal Field. The country's major railroad companies soon swallowed up the independents. Already in control of the rail and barge canal system over which coal moved to market, the major railroads launched an aggressive plan to gain control over the entire northeast anthracite industry--from mine to furnace. While railroad officials gobbled up the independent coal companies, their land agents descended on the farmers in the coalfields offering sums of money most couldn't resist. By the 1860s the major railroads had succeeded in making massive land grabs throughout the Wyoming Coal Field, including Newport Township. With enormous wealth and a monopoly of the only transportation system capable of efficiently mass-moving the coal to market, the railroads fast emerged the uncontested economic power in the anthracite coal industry. By 1870 seven major railroad companies had emerged as controlling interests in all mining operations in Newport Township: the Delaware and Hudson, Delaware Lackawana and Western, Illinois and Western, Lackawana and Bloomsburg, Lehigh Coal and Navigation Co., Central Railroad of New Jersey and the Pennsylvania. The Nanticoke Railroad was first to extend its track system into Newport Township in 1862, constructing a branch that terminated at the Lehigh Coal and Navigation Co. Mine in Wanamie. Shortly after, the Lehigh and Susquehanna Railroad acquired and operated the branch. The track was leased to the Central Railroad of New Jersey in 1871 and extended further west in 1885 to a mine that was opened north of the hamlet of Lee. The Nanticoke Railroad, (formerly Wilkes-Barre-Scarnton Railroad) was first to extend its system into Newport Township, constructing a branch that terminated at the Lehigh Coal and Navigation Co. mine in Wanamie. The Lehigh and Susquehanna Railroad acquired the branch in 1867 and in 1871 leased it to the CRNJ. The Lehigh Coal and Navigation Co. mining operation was bought by the CRNJ owned, Lehigh and Wilkes-Barre Coal company. In the 1930s, the Glen Alden Co, acquired all the assests but continued to use the Central of New Jersey Railroad system.